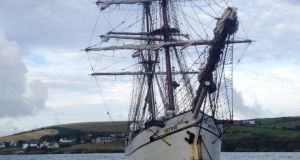 The SS Astrid: the decision to scrap her was made in consultation with the insurers after assessing the damage to the vessel when she sank at Quay Rock off Ballymacus Point near Kinsale, Co Cork, earlier this year.

The owner of the historic tall ship Astrid, which was salvaged last week after sinking off the west Cork coast yesterday, spoke of his sadness at the decision to send the 95-year-old sailing ship for scrapping.

Owner and skipper Capt Pieter de Kam said the decision was made in consultation with the insurers after assessing the damage to the vessel when she sank at Quay Rock off Ballymacus Point near Kinsale.

“I am very saddened at the decision but the Astrid hit the rocks very hard and the damage to her hull and keel is very extensive – three quarters of the hull is damaged and it would simply cost too many euros to repair and restore her,” he told The Irish Times.

He said he expected the ship to be scrapped in Cork in the coming weeks.

The 42-metre steel hulled Astrid ran into difficulty when participating in the Irish Sail Cruising Association’s Gathering Cruise after it engines failed when leaving Oysterhaven for Kinsale on July 24th and the ship ran on to the Quay Rock at Ballymaccus Point.

Four stillbirths among women with Covid-19 prompt alert to maternity staff on precautionary basis 18:27
Man shot in Limerick 10 years ago jailed over gun found after car chase 18:25
Covid-19: Face masks should not be compulsory for primary school pupils, Hiqa says 18:47
People with mental illness should be treated close to home, says health body 17:59
Experts disclose secret to fantasy football’s best . . . and the rest 17:45