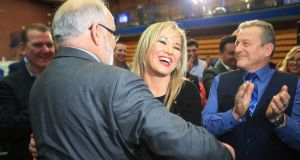 Sinn Féin’s Michelle O’Neill after winning her seat in Mid-Ulster. This election will encourage Sinn Féin to make a greater push for a Border poll and lead to more talk of a united Ireland. Photograph: Paul McErlane/AFP

Politics in Northern Ireland is shaken not stirred. Sinn Féin is the story of this election, and that is demonstrated strikingly in the figures. In last year’s Assembly election just 10 months ago the DUP was almost 36,000 votes ahead of Sinn Féin. Now there are less than 1,200 votes between the two parties, with the Democratic Unionists marginally in front.

This will have significant implications. It will raise questions over Arlene Foster’s leadership of the DUP, not least because she as much as – and possibly more than – Gerry Adams, Martin McGuinness and Michelle O’Neill managed to get Sinn Féin voters out in big numbers.

It will bring constitutional and confrontational matters such as a Border poll to the fore. It will further embolden Adams and Sinn Féin. It will cause unionism much reflection and unease.

It could damage the SDLP and the Ulster Unionists, creating the notion that Sinn Féin and the DUP really are the only nationalist and unionist players in the game.

It also raises the question over how long it will take to restore the Northern Executive and Assembly after the dust settles, or whether Stormont is to be mothballed for a long time.

This time the people of Northern Ireland decided to speak with a louder and greater voice. Close to 110,000 more people than 10 months ago voted in this election.

In the 2016 Assembly election 703,744 people, or 55 per cent of the electorate, turned out to return 38 DUP Assembly members, 28 for Sinn Féin, 16 for the Ulster Unionists, 12 for the SDLP, eight for Alliance and six for the smaller parties and Independents.

The DUP could return with between 28 and 32 seats, and Sinn Féin with between 25 and 28 seats. It is not beyond the bounds of possibility they could finish neck and neck.

The high turnout demonstrated that people were invigorated, in many cases angered, over issues such as the Renewable Heat Incentive (RHI) scheme which could cost half a billion pounds more than it should; what was perceived as an arrogant and cavalier attitude by Foster; the Irish language; and matters such as showing basic manners across the political divide.

From the moment that McGuinness stood down as deputy first minister in January, and even from before Christmas when the “cash for ash” issue kicked off, Foster and her party have been on the back foot. It is difficult to hold what you have when you are constantly on the defensive.

Nationalists more than unionists were compelled to come out and voice their opinion about matters such as RHI and the egregious manner in which former DUP minister Paul Givan scrapped a relatively miserly £50,000 Irish language grant, and later – but much too late – restored it.

For instance, in Mid-Ulster, where new Sinn Féin leader Michelle O’Neill topped the poll, the turnout was 72 per cent, up 13 per cent.

In West Belfast, where Sinn Féin’s Orlaithi Flynn was the first MLA home in the election, the Sinn Féin vote was strong and disciplined, while People Before Profit, which had been damaging that republican vote, dipped significantly.

In West Belfast veteran SDLP politician Alex Attwood lost his seat, meaning for the first time that there is no SDLP representation in the constituency – a constituency where big names such as Gerry Fitt and Dr Joe Hendron served as MPs.

The former took some positives. Having won 12 seats last May, it was seemingly on course to win between nine and 11 seats, which, given the reduction in seats, was a decent result. It was not, however, the major change leader Colum Eastwood was hoping for.

While the loss of Attwood’s seat in West Belfast was predicted, it was a blow to the SDLP nonetheless. However, there was consolation in that Nichola Mallon, who was under threat in North Belfast, seemed likely to be returned.

For UUP leader Mike Nesbitt, the result meant the end of his leadership of the party – a decision announced late Friday. The UUP won 16 seats last May and numerically was hoping to increase its representation, notwithstanding the reduction in the size of the Assembly. At the time of writing the UUP seemed likely to win nine seats or less, which would be a very disappointing if not a disastrous result.

The irony of this election is that there was an expectation that a higher turnout would assist the more centrist parties. Yet while the DUP is undermined, the UUP appears more damaged. The SDLP held reasonable ground, but Sinn Féin gained significantly.

In the next big electoral battles such is the strength of the DUP and Sinn Féin that people may decide that the orange versus green battle is where the political focus must be, and place greater faith in the two main parties to the further detriment of the Ulster Unionists and SDLP.

Alliance will be happy with the result. It was on course to hold its eight seats, which is a net gain, but moreover its vote was up 2.1 per cent.

Again at the time of writing the Greens appeared set to hold its two seats, Jim Allister of the Traditional Unionist Voice to be returned in North Antrim, and People Before Profit to drop from two to one seat, with Eamonn McCann under threat in Foyle and Gerry Carroll holding his seat in West Belfast.

From Monday the work begins to restore Stormont, with politicians clueless as to how long that will take and uncertain whether it is even possible.