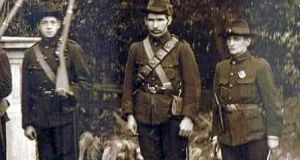 A photograph of Willie Halpin (right) before the Rising when he was in the Irish Citizen Army. Photograph: Cyril Byrne

An archaeological search will take place at City Hall to search for a rifle from the Easter Rising, thought to be lodged in a small gap between buildings for the last century.

The retrieval attempt will take place on Wednesday, and will last no more than a day. The sought after rifle belonged to Willie Halpin, whose family history claims that rather than surrender the gun to the advancing British army he dropped it down the side of City Hall from the roof where he was fighting.

Ruth Johnson, chief archaeologist at Dublin City Council, has overseen the project to investigate if the rifle may still be in a narrow foot-wide gap between City Hall and an adjacent building, covered in debris for over 100 years.

If found the rifle would be a serious artefact from 1916 Easter Week conflict, and would “require extensive conservation post-excavation”, Ms Johnson said.

The small gap between the two buildings was closed off by a wall for years, and in recent times blocked by a large drainpipe.

Over the last year the project has been pushed by the Halpin family and Independent councillor Nial Ring, who was recently elected Lord Mayor of Dublin. Mr Ring said he was “delighted” the excavation was going ahead, adding “hopefully they find the rifle”.

Franc Myles, the archaeologist who will conduct the search itself, said the drainpipe would be removed on Wednesday morning, opening access to the gap. “We have these flexible rods, which we will use to scrape out the debris and inspect it.”

Willie Halpin, from Hawthorn Terrace, East Wall, had bought his rifle off a British soldier some time before the Rising for £5.

The battle at City Hall is often an overlooked chapter in the story of the 1916 rebellion, where a small force of rebels were tasked with taking Dublin Castle.

Within an hour of securing the roof, Connolly’s force, which included Halpin, was pinned down by British sniper fire. First Connolly, and then Sean O’Reilly, who took up command afterwards, were killed by sniper fire.

Hugo McGuinness is a local historian involved with East Wall Historical Society and part of the group which petitioned Dublin City Council to consider an archaeological search for the rifle.

The firing came from all sides and continued till after darkness fell. There was no way of escape

He said that after Connolly and O’Reilly are killed, Halpin assumed command of the under-fire rebel force.

By Monday evening the rebels trying to defend City Hall had taken heavy casualties and were “overwhelmed”. Up on the exposed roof, “they must have realised they were in hell. Willie Halpin is probably the only one level-headed, and he starts setting up spotters and the rebels start firing back”, McGuinness said.

An account from the roof by Dr Kathleen Lynn, who was heavily involved in Cumman na mBann and chief medical officer with the City Hall rebels, described the situation: “The firing came from all sides and continued till after darkness fell. There was no way of escape.”

Under Halpin’s command the force holds the British off for most of Monday, until troops break into the ground floor of the building. At this point Halpin feared he would be executed as the effective commander of the group and discarded his rifle. He then climbed into a chimney to try to evade capture.

Described in eyewitness accounts as “little Halpin” due to his short and slender stature, he hid for nearly two days in the chimney. When he came down he was captured by two startled British soldiers, and was detained at Ship Street barracks, Bureau of Military History records show.

His great grandson Daniel Halpin (33) has been one of the relatives campaigning for the local authority to search for the lost rifle. “The GPO would have always had the lion’s share of historical focus but there was a lot more going on.”

He said the excavation going ahead was “exciting” , but added that even if the search came up empty-handed “it was always more about bringing Willie’s story to the public”.