Irish Times political correspondent Harry McGee reports on the resignation of Rehab Chief Executive Angela Kerins and her statement that the controversy has taken it's toll on the Rehab Group and as well as her personally. Video: Bryan O'Brien 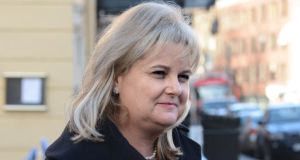 Rehab chief executive Angela Kerins said she was resigning because the public controversy had taken a toll on the Rehab Group and her family. Photograph: Cyril Byrne/The Irish Times

Angela Kerins has announced she is resigning as chief executive of the Rehab Group citing the toll the controversy surrounding the charity group has taken on it and also on her personal life.

Ms Kerins confirmed this morning that she was stepping down.

In a message to staff at the group, Ms Kerins said: “In recent months I have become increasingly concerned about the toll that public controversy has taken on the Rehab Group and my own family.

“While I have dedicated my energies and ability to growing and developing the group for the past 22 years, I am of the view that it is in the best interests of all concerned that I step down at this time.”

In a statement, the board of Rehab confirmed Ms Kerins is stepping down.

Chairman of Rehab Group Brian Kerry said: Angela Kerins has led the Rehab Group with dedication and resolve. During her two decades with the organisation she has always striven to ensure that those who needed its services received the best possible support.”

It comes ahead of a scheduled appearance on Thursday week for Ms Kerins and other key figures from the disability charity group before the Dáil’s spending watchdog, the Public Accounts Committee.

As of now, it is not known whether she will herself appear before the committee.

Ms Kerins and her predecessor as chief executive, Frank Flannery, have both been at the centre of controversies surrounding executive pay levels and consultancy fees at the charity.

Ms Kerins initially refused to disclose her salary, but after sustained pressure the group disclosed that it is €240,000 per annum.

Similarly, The Irish Times reported earlier this year that Mr Flannery had invoiced the charity group for over €70,000 in a year for lobbying the Government in relation to the lottery it operates and on other matters.

Reacting to the development, Sinn Féin deputy leader Mary Lou McDonald, a member of the PAC, said she was not terribly surprised.

“I had a sense that once Frank Flannery stood down that she would follow suit,” she told The Irish Times.

“We still have serious issues that we need to address with the Rehab Group.

“Mr Flannery is coming before us on April 10th. With Ms Kerins, we still expect her full co-operation with PAC as we work through myriad issues.

“If she thinks resignation means she can absent herself from PAC inquiries or prevent her answering further questions, she is very much mistaken.

“She holds a very senior position. She remains accountable for those matters. I expect her to fully co-operate,” said Ms McDonald.

Ms Kerins is from Co Waterford and trained and worked as a midwife before joining Rehab. She succeeded Mr Flannery as chief executive in 2006.

Known to have strong Fianna Fáil connections, she has been a prominent figure for 20 years and has been member of numerous State boards and bodies.

Ms Kerin’s disclosed salary in 2011 was €234,000 but despite repeated requests from PAC over the past six months, the charity refused to give up-to-date figures on her salary.

It also followed a series of reports on public funding for charity lotteries which showed that many of them were making miniscule profits (and losses in some cases) but were getting substantial State funding based on the volume of sales.

However, amid sustained public sector controversy over salary levels in the charity sector, the board of Rehab decided in February to disclose salary levels.

In a breakdown supplied to the PAC last month, it was disclosed that some 12 of its executives earned over €100,000 per annum.

Ms Kerins and others have argued that much of Rehab’s revenue nowadays comes from the non-State sector.