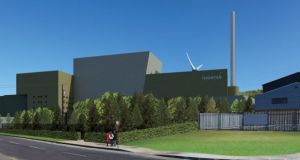 An artist’s impression of the proposed incinerator

An Bord Pleanála has deferred its decision on the development of a€160 million incinerator in Cork Harbour for the ninth time.

Campaigners against the incinerator now hope the board’s decision to defer indicates a seriousness of approach in relation to the various issues raised at an oral hearing into the project.

Cork Harbour Alliance for a Safe Environment (Chase) said it had received confirmation from the board that it would not be meeting its December 19th target for a decision on the planned incinerator project proposed for Ringaskiddy by waste management company Indaver.

Under the proposal for the 13.5 hectare site at the end of the Ringaskiddy peninsula, Indaver is proposing to build an incinerator which would treat 300,000 tonnes of municipal waste and 50,000 tonnes of hazardous waste per annum.

According to Chase spokeswoman Linda Fitzpatrick, the board confirmed Indaver’s response on a number of queries is still with the oral hearing inspector Derek Daly, who must include it as an addendum to his report to An Bord Pleanála.

A spokesman for the board told The Irish Times it had sought further information from Indaver in relation to the impact the incinerator chimney stack would have on helicopter movements around the nearby Naval Service base at Haulbowline.

The board also sought information after Indaver erroneously supplied incorrect figures on dioxin levels on the last day of the oral hearing in April; it then sought responses from interested parties, including Chase, on both issues.

The board’s spokesman said all responses from the various parties to the additional information sought from Indaver have now being received and are being considered, but the decision date of December 19th has been delayed until the end of February.

Chase spokeswoman Mary O’Leary said while the decision to defer was regrettable, in that the local community were now almost two years awaiting a decision, it did at least suggest An Bord Pleanála was examining the matter diligently.

“The obvious upside is that while the decision is still hanging over the community, at least we can enjoy a normal Christmas. We hope that the ongoing delays reflect due diligence by (An) Bord Pleanála rather than keeping the goal open until the applicant can get a shot in,” she said.

Ms O’Leary said it was essential the board engages its own qualified independent experts to assess Indaver’s latest information regarding helicopter movements and dioxin levels and does not take the information at face value.

“The robust examination of Indaver’s application and further information via oral hearings and submissions by this community will have highlighted that need by exposing both careless errors and errors with a degree of gravity that led the hearing inspector Derek Daly to say threatened the veracity of the documentation,” she said.

Asked about the deferral, an Indaver spokeswoman said it noted the board’s decision, but declined to comment further.

The most recent chapter in the long-running saga began on January 13th 2016, when Indaver lodged a planning application under the Strategic Infrastructure Act and An Bord Pleanála subsequently held an oral hearing to hear submissions.

The hearing lasted almost a month in April and May 2016 under Mr Daly, who was initially due to give a decision on July 12th 2016. That decision was deferred until October 26th 2016 and then until January 24th 2017, before being deferred a further seven times.