Investigation under way after incident involving air ambulance returning to base 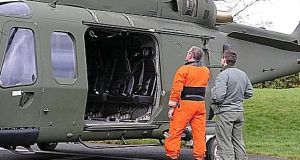 Inspectors examine an Air Corps AW 139 army helicopter in 2009 after its door fell off while carrying then minister Martin Cullen in March 2009. The door was found in the nearby Killarney National Park. Photograph: Don MacMonagle

An investigation is under way after the rear door of an Air Corps helicopter detached and fell more than 250m into the grounds of a Dublin secondary school.

The crew of the AW139 aircraft had successfully completed a life-saving mission to a Dublin hospital and were returning to Baldonnel Aerodrome for fuel when the incident took place at 5.52pm on Thursday evening.

The door fell into the grounds of Moyle Park School, a boys’ secondary school in Clondalkin.

The incident was witnessed by several people on the ground though nobody was hurt.

Locals in Clondalkin, Dublin, find a helicopter door in Corkagh Park after it had fallen off an Air Corps helicopter flying overhead this evening pic.twitter.com/Mf2eNjMuJ5

A Defence Forces spokesman said its personnel were on the grounds within five minutes along with members of An Garda Síochána.

An investigation team were on scene within 30 minutes. Once the area was analysed, the door was removed and transported to Baldonnel.

The emergency aeromedical service will recommence on Friday, as normal, with a replacement aircraft and crew.

A full investigation will be conducted into the cause of this incident.

Gardaí said they were alerted to an item falling from the sky at approximately 6.20pm.

A number of witnesses contacted gardaí in Clondalkin to confirm a large item landed in the grounds of Moyle Park College.

The incident was not the first time a door from an Air Corp helicopter was lost. In 2009, the door on the Air Corps AW 139 army helicopter fell off while ferrying then minister Martin Cullen over Killarney Golf Club in March 2009. The door was found in the nearby Killarney National Park.

Induction delay for 160 Defence Force recruits due to Covid-19 14:02
Covid-19: Harris urges people not to think it’s ‘mission accomplished’ ahead of next phase 13:36
Dáil observers minute’s silence after death of George Floyd in the US 13:34
End ‘shameful stand-off’ over pension for Troubles’ victims, Johnson told 12:39
Covid-19: Doctors seeing ‘angst and loneliness’ in older people forced to cocoon 12:31