Bad weather and bus strikes didn't deter thousands turning out for the fifth annual March for Choice rally in Dublin. 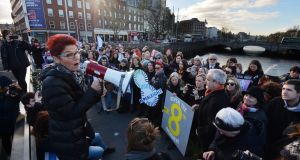 In the final weeks of the marriage equality referendum campaign in May 2015, some seasoned political observers began to question whether the opinion polls – all of which showed a massive lead for the Yes side – were actually correct.

Were there in fact thousands of “shy No” voters out there, who, for whatever reason, weren’t telling the truth about their voting intentions?

Some newspaper columnists warned of a hidden backlash from Middle Ireland against the apparently universal media consensus in favour of voting Yes. Reports suggested that rural Fine Gael politicians were getting a much more negative reaction to the campaign on the doorsteps than was evident in the polls, and the former editor of The Irish Times, Geraldine Kennedy, told RTÉ she believed the No side would prevail.

Of course, the referendum passed comfortably, with all but one constituency in the country voting in favour.

But the last-minute wobbles were not entirely unfounded: the final Yes vote of 62 per cent was several percentage points below the level of support indicated by the final polls. Because this had no material impact on the result, it was largely ignored. But it demonstrated yet again that referendums are more fluid and unpredictable than other electoral contests, and that the centre of gravity can shift over the course of a campaign.

Some of the key voices from both sides in 2015 will be active again in the next major referendum, which will almost certainly be closer and more fiercely fought. The Eighth Amendment to the Constitution, prohibiting abortion except in cases where there is a threat to the life of the pregnant woman, is currently under consideration by the Citizens’ Assembly. The general expectation is that the assembly will recommend constitutional change, and pro-choice groups are optimistic that such a recommendation will lead to a vote on the removal of the Eighth Amendment, leaving the Oireachtas to determine an appropriate legislative framework governing the provision of abortion in Ireland.

On this, if nothing else, advocates of repeal are in agreement with many on the anti-abortion side who criticise the entire process as designed to deliver a preordained outcome.

The Citizens’ Assembly will deliver its recommendations for consideration by the Oireachtas in June. In many ways, though, the campaign is already well under way, with both sides mobilising.

So far, the repeal side has been the more prominent. From Twitter hashtags to TDs wearing black-and-white “Repeal” jerseys in the Dáil, the movement has been growing in volume and visibility over the past year. That will increase further with the “Strike 4 Freedom” day of protest planned for International Women’s Day on March 8th.

Not everyone who supports repeal thinks these activist tactics are helpful in achieving the ultimate prize of winning the referendum, however.

Ed Brophy was chief of staff to tánaiste Joan Burton in the previous government. He now runs the research and strategy group Ireland Thinks and is one of a number of people who believe the current approach is preaching to the converted and risks alienating the all-important middle ground.

“Referendums tend to be a tabula rasa on which people project other things,” says Brophy. “We’ve done some polling on this referendum, and there will be a lot of really motivated people on both sides. But our sense is that it has to be won on the centre ground.

“The big thing you have to do is not pander to the extremes. Yes, you should point out the cruelties that are currently visited upon women, but to do that you need to turn down the volume if you want to run a campaign that has a better chance of winning.”

This sort of criticism has not been well-received by repeal activists, who accuse critics of lecturing women on how they should go about campaigning for their rights.

The Irish Times Inside Politics podcast this weekend features a discussion with three prominent public figures associated with the repeal campaign to discuss its strategy.

Ailbhe Smyth is convenor of the Coalition to Repeal the Eighth Amendment, an alliance of more than 70 organisations; Colm O’Gorman is executive director of Amnesty Ireland; and Dublin Bay South TD Kate O’Connell is one of the most vocal supporters of repeal within the Fine Gael parliamentary party. How do they see the repeal campaign’s strategy unfolding over the next 12-18 months?

“So much will depend on the kind of recommendations that come from the Citizens’ Assembly,” says Smyth. “We’re hoping for a clear recommendation the amendment will be repealed and nothing inserted in the Constitution to replace it, and therefore that the government will call a referendum. We want to be very clear that the referendum will be called over the next 12 months.”

According to Smyth, the repeal movement is growing stronger every day.

“And it’s not just the same sort of people all the time,” she says. “We have a mapping exercise under way, and already we have a couple of dozen different groups dotted around the country.”

Any political campaign necessarily includes a number of different, sometimes contradictory, objectives. There is a delicate balance to be struck between energising the base of committed activists and appealing to the wavering centre ground. For the moment, the repeal campaign seems to be focusing on the first of these.

Judging by opinion polls, the repeal side appears to be starting from a strong position. People’s views on abortion have shifted significantly since the Eighth Amendment was passed by a two-to-one margin in 1983. The most recent Ipsos/MRBI poll for The Irish Times showed a three-to-one majority in favour of repeal.

Seven per cent supported the current legal position, whereby abortion is allowed only when a woman’s life is at risk, and just 5 per cent were opposed to abortion in all circumstances.

This is complicated terrain to navigate for a political debate that will ultimately boil down to a simple yes or no vote. If the narrative unfolds as expected over the next few months, much of the debate will focus on what the legal situation will be if the electorate votes to repeal the amendment. While some experts have argued that there is no legal requirement to have new legislation in place immediately if the amendment is repealed, the political reality is that any Government-supported campaign for a yes vote will have to be clear on the legislation that will follow.

“We talked in the last government about how legislation was required,” says Brophy. “Purely from a political point of view, that’s essential. The legislation is a particular protection, but it is also a trap. I don’t think it will work if people dissociate themselves from the legislation.”

For O’Connell and others, a minimalist, restrictive approach to new legislation would be unacceptable.

“There is a value to talking about treating people equally and the right of women to bodily autonomy,” she says. “I have a real problem when politicians say, ‘Oh, we will repeal the Eighth and only have abortion available in cases of rape and incest and fatal foetal abnormalities’. I see that as a complete cop-out. Anybody who thinks that would be fine hasn’t studied the consequences for the women and the families of this country.”

On the contentious issue of tone, Brophy believes the repeal movement needs to take a leaf out of the marriage equality campaign’s book, which, he says, deliberately dialled down the visibility of some LGBTQ figures.

“The playbook in the marriage referendum was to persuade voters that it was a live-and-let-live issue of tolerance and getting rid of cruelty,” he says. “A man in a dress wouldn’t persuade that middle ground and might be a negative. It was a campaign about the expression of love. I’m not sure the issue of abortion is ever going to be one that is celebrated in Dublin Castle.”

O’Connell agrees that some lessons can be learned from the marriage equality campaign.

“People in Ireland like to hear stories about real people and the effects the actual law has had on their lives,” she says. “I would say, as a healthcare professional, you never know what’s going on behind people’s doors.”

But O’Gorman is cautious about drawing parallels between the two campaigns.

“There is nothing like success for people to start reinventing the story of what actually happened,” he says. “There are a lot of assumptions being made about that campaign. I’m not sure to what degree there was a playbook but people worked very hard in a very disciplined way to deliver.”

O’Gorman expresses impatience with “people from outside the process who want to dictate, particularly to women, how they should speak, what their views should be and whether or not it’s appropriate or acceptable to be angry in their demand for a change. For heaven’s sake, imagine saying that to a group of people in the context of clear findings that the laws cause a grave violation of their rights.”

Smyth points to a key difference between what she acknowledges was the “disciplined messaging”of the Yes campaign in the six weeks leading up to the marriage equality referendum.

“At that point, everybody’s mind gets focused on the goal, which is to win the referendum, but in the lead-up to a campaign, particularly when there is a very broad and growing social movement, in which young people really do call quite a lot of the shots, of course they are raising their voices and putting their heads above the parapet,” she says.

“I love that. It’s about them saying we have ideas and views and passions. We want to express those and be part of the public discourse. Even if I could, I personally would not be in favour of cracking a whip and saying you can all keep quiet now.”

Hugh Linehan presents the Inside Politics podcast on irishtimes.com