In addition to a host of measures that address climate change, the Green Party also succeeded in dealing with the ‘just transition’ 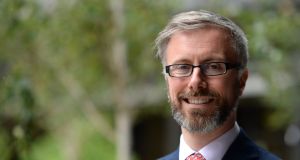 Roderic O’Gorman: he was able to announce significant increases in funding for the child agency Tusla, and also for direct provision. Photograph: Dara Mac Donaill

The budget, one that deeply involved the Green Party, is probably the greenest in recent history but that is an unsurprising element of an extraordinary event.

The move towards a green and circular economy forms part of the programme for government. The question was: how much would Fine Gael and Fianna Fáil buy into the Green Party’s agenda. As it happened a lot more than one would have anticipated pre-Covid.

Green Party sources say that most of the demands the party made were met, if not totally at least a good deal along the way. In addition to a host of measures that address climate change, the party also succeeded in dealing with the “just transition” part of the phenomenon, ensuring measures were inserted that protected the old and the vulnerable .

As expected there was a €7.50 increase in carbon tax. This will allow the setting up of a war chest known as the Climate Action Fund. Some €300 million is being allotted to broad measures to retrofit homes and buildings to improve their insulation. Funding has been earmarked for renewable energy, for public transport (particularly the electrification of the train system) and for further investment in sustainable agriculture, forestry and industry.

In addition, for the first time since the Greens were in government in 2008, there will be a major redesign of motor tax and vehicle registration tax (VRT).

Then it was mistakenly thought that diesel represented a cleaner future than petrol. Now that is being reversed. The VRT and motor tax regimes will be biased in favour of low-emitting cars, from electric vehicles, to hybrids, and then the modern efficient petrol models. The scheme that was unveiled at budget is complicated, but the net impact will see the volume of diesel cars on Irish roads fall considerably.

Anyone who followed the internal debate within the Greens about entering coalition would have been aware of the social justice element. Green sources said that a huge priority for the party besides preparing for its aim of a green recovery was to protect the vulnerable.

The Government commissioned the ESRI to see how carbon taxes could be applied in the most progressive way. Thus there were specific measures geared towards poorer and less protected cohorts. They included increases in the qualified child allowance, in the fuel allowance and also in the living-alone allowances.

There were big increases in other areas which have become more core to Green Party thinking, including disability and mental health.

And any doubt as to how the wider parliamentary party would receive the budget was dispelled when Neasa Hourigan issued a press release warmly welcoming the progressive measures protecting the vulnerable.

Like virtually every other Minister, the three senior Green Ministers could show that they had negotiated increases in funding in core areas.

Roderic O’Gorman in the Department of Children was able to announce significant increases in funding for the child agency Tusla, and also for direct provision.

Catherine Martin could show considerable “gets” in the reduction of the hospitality VAT rate to 9 per cent, and the major scheme which will help struggling entities in tourism, hospitality, performance and the arts who can show a significant fall in turnover. They can get grant relief of up to €5,000 per week.

In a sense the budget represents a success for the party and sees its TDs and Senators united in that view – in contrast to the fragmentation of earlier this year.

In any other year that would have captured perhaps most attention. But because of the extraordinary circumstances the fact that it’s a “green budget” represents just one element of a very complicated and unusual document.