A dozen greyhounds found in cramped cages at Dublin Port

Customs and DSPCA are investigating the discovery made at the weekend 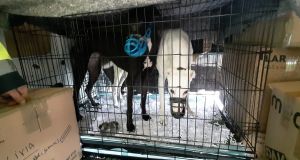 The DSPCA said the dogs had all been loaded onto the van at a facility in Co Tipperary, before travelling to Dublin port. Photograph: DSPCA

Customs and the Dublin Society for the Prevention of Cruelty to Animals are investigating the discovery of 12 greyhounds in cramped conditions in Dublin Port.

The dogs were found at the weekend in cages stacked on top of each other or piled with other boxed goods, and had now access to food or water, despite an estimated journey of over 24 hours ahead of them.

They were being transported in a Spanish registered vehicle which was operating without the correct Department of Agriculture licence for transporting live animals, a DSPCA spokeswoman said.

“The big question is where these animals are going to and what welfare conditions are awaiting these animals at the end of the journey,” the spokeswoman said. The conditions in the van would form a second element of the investigation.

Several of the dogs were found to have minor injuries and elevated body temperatures, and all of them were showing signs of dehydration. According to paperwork accompanying the dogs, they were all registered with the Irish Greyhound stud book and originate from dog trainers in Cork, Kerry, Tipperary and Wexford.

The DSPCA said the dogs had all been loaded onto the van at a facility in Co Tipperary, before travelling to Dublin port. The organisation said it is “appalled by the barbaric treatment of these animals despite the revelations seen in RTÉ’s Primetime programme, Greyhounds: Running for Their Lives”.

While customs officers stopped the van due to the conditions the animals were travelling in, all twelve had pet passports and were permitted to travel from a legal point of view. Racing animals are regulated by the Irish Greyhound Board (IGB), but the organisation has no regulatory oversight of the export of animals.

Nonetheless, it said it had been made aware of the incident and its welfare department is conducting a full investigation under the Welfare of Greyhounds Act to establish whether any breaches had occurred.

“The IGB condemns any mistreatment of greyhounds in the highest possible terms.” It said any person or persons found to be in breach of the act “have been and will continue to be subject to prosecution”.

The DSPCA, however, criticised the board, saying “this seizure flies in the face of the illusion being created by IGB that animal welfare is being taken seriously”.

“The continuing grant of € 16.8 million of taxpayers money is no longer acceptable,” said DSPCA chief executive Brian Gillen, who also called on the Government to withdraw all funding allocated to the industry by the State.

‘Be well informed about the company before you get to the interview’ 05:00
Widow of Meath nursing home resident queries findings of inspection report 03:23
Aer Lingus staff say they are living in ‘near poverty’ and unable to cover rent 03:11
Covid-19: Warning of similar measures for other counties as Donegal moves to Level 3 01:26
‘Time management is essential to my work life’ 01:00

1 Aer Lingus staff say they are living in ‘near poverty’ and unable to cover rent
2 Covid-19: Warning of similar measures for other counties as Donegal moves to Level 3
3 Séamus Woulfe: The last man standing in Golfgate is set to learn his fate
4 Next 10 days critical in fight against Covid-19 in Cork, says adviser
5 Man found guilty of murder of Ciara Glennon and second woman in 1990s
Real news has value SUBSCRIBE