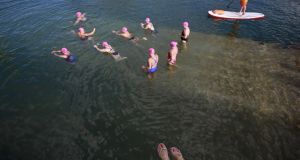 A series of multimillion-euro projects planned for Dún Laoghaire harbour have been thrown into question, including a €5 million urban beach, a €51 million diaspora centre, and a €30 million cruise berth facility.

Dún Laoghaire-Rathdown County Council has said there is no money for many, if not all, of the plans in advance of the publication of a new economic study on the viability of the proposals.

The proposals were put forward by the Dún Laoghaire Harbour Company, which no longer operates the harbour.

The council took control of the harbour last year at the behest of Minister for Transport Shane Ross. The decision left many councillors unhappy, as the Minister did not provide funding to meet the estimated €30 million cost of carrying out structural repairs at the harbour.

In a progress report on integrating the harbour into the local authority which was presented to councillors on Monday night, council management said there was no money for many of the projects proposed for the harbour.

However, council management also said it had secured Government funding under the Urban Regeneration and Development Fund to draw up a “spatial and economic action study” which would make recommendations in relation to “potential economic opportunities for the town of Dún Laoghaire, including the harbour”.

In the progress report, council management noted the urban beach plan, including a swimming pool containing heated and treated seawater, would cost €5 million. The report said that as it stood there was “no funding mechanism to advance this project” and “the business case for this project indicated it would not be self-sustaining”.

In relation to the diaspora centre, the report said €51 million was needed and that “there is no funding mechanism to progress this project in place”.

In relation to the facilities for cruise ships, the council said the funding required was €30 million and “there is no funding mechanism in place” for this. It said the Dún Laoghaire Harbour Company had spent about €1 million on this plan, of which €250,000 was provided by the council itself.

The report for councillors also mentioned the former ferry terminal, which has planning permission for a restaurant and co-working spaces on three floors, as well as for visual media studios, workshops and a variety of office spaces.

The council said this could “be a valuable source of income to fund the ongoing maintenance of the harbour and its operation”.

The deadline for expressions of interest in the building is March 26th.

The report repeated earlier warnings from council management that the “infrastructure deficit” – the cost of repairs to get the harbour up to an acceptable standard – currently stands at €38 million, including VAT.

Councillors were told the “immediate priority” was to complete the works on the East Pier to address recent storm damage.