Brazilian president Jair Bolsonaro has once again claimed that NGOs who have had funding suspended by Norway and Germany are behind the Amazon forest fires. Video: Reuters 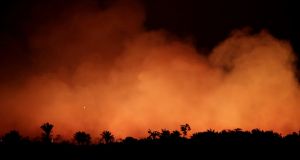 Smoke billows during a fire in an area of the Amazon rainforest near Humaita, Amazonas State, Brazil, on August 17th, 2019. Photograph: REUTERS/Ueslei Marcelino/File Photo 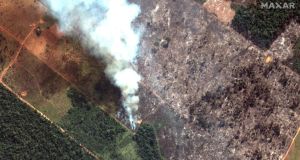 Taoiseach Leo Varadkar has threatened that Ireland will vote against the Mercosur trade deal with South American countries unless Brazil observes environmental standards and protects the Amazon rainforest.

His warning comes as wildfires rage in the Amazon amid international criticism of Brazilian president Jair Bolsonaro for failing to protect the rainforest.

“There is no way that Ireland will vote for the EU-Mercosur free trade agreement if Brazil does not honour its environmental commitments,” Mr Varadkar said in a statement on Thursday night.

He said he was “very concerned that this year has seen record levels of destruction of Amazonian forests by fire” and sharply criticised the Brazilian president.

“President Bolsonaro’s efforts to blame the fires on environmental NGOs is Orwellian. His statement that Brazil will stay in the Paris accords on Climate Change ‘for now’ will raise antennas across Europe,” he added.

The Government was criticised by farming organisations after the Mercosur trade deal was agreed between the EU and four South American countries including Brazil and Argentina. They fear that imports of South American beef will undercut Irish beef which is subject to strict EU environmental standards.

Many farming and environmental organisations were also critical of the deal for facilitating access to European markets for beef which is often raised on land where rainforest has been cleared.

“The Mercosur deal is two years away from a vote on approval in Europe,” Mr Varadkar said.

“During the course of these two years, we will monitor closely Brazil’s environmental actions. There is no way we can tell Irish and European farmers to use fewer pesticides, less fertilizer, embrace biodiversity and plant more of their land and expect them to do it, if we do not make trade deals contingent on decent environmental, labour and product standards. The political agreement on Mercosur does that. We’ll monitor closely if they mean it,” the Taoiseach said.

His statement comes amid growing international criticism of Mr Bolsonaro’s flippant response to the Amazon fires.

Wildfires raging in the Amazon rainforest have hit a record number this year, with 72,843 fires detected so far by Brazil’s space research centre INPE.

The surge marks an 83 per cent increase over the same period of 2018, the agency said on Tuesday, and is the highest since records began in 2013.

Images show the northernmost state of Roraima covered in dark smoke. Amazonas declared an emergency in the south of the state and in its capital Manaus on August 9th. Acre, on the border with Peru, has been on environmental alert since Friday due to the fires.

Wildfires have increased in Mato Grosso and Para, two states where Brazil’s agricultural frontier has pushed into the Amazon basin and spurred deforestation. Wildfires are common in the dry season, but are also deliberately set by farmers illegally deforesting land for cattle ranching.

The unprecedented surge in wildfires has occurred since Mr Bolsonaro took office in January vowing to develop the Amazon region for farming and mining, ignoring international concern over increased deforestation.

Election 2020: Fianna Fáil and Fine Gael ramp up attack rhetoric 02:37
‘Men like Seamus Mallon don’t come along too often’ 02:05
Men ‘delighted’ to be invited to Citizens’ Assembly on gender equality 01:00
Investment in our Olympic hopefuls may be costly – but it’s worth it 01:00
Government must ‘come clean’ on children’s hospital delays and costs 01:00