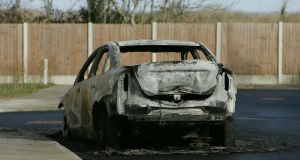 Young boys were being used by the older gang members to deal drugs on the streets as well as for storing drugs, burning out cars as a means of intimidating others and even forcing some families out of particular areas, one garda said. Photograph: David Sleator

The murder of 17-year-old Keane Mulready-Woods will have come as little surprise to community activists and gardaí working with boys who have been sucked into crime networks, or criminal gangs, in their own communities.

The manner of Keane’s murder, and the dismembering of his remains, has shocked the country. However, that a boy was being used as a foot soldier by a feuding gang in Drogheda and that he so rapidly became a victim of that violence will surprise few at the coalface of policing and community activism.

Keane was a suspect for petrol bombings on homes in Drogheda linked to the gangland feud in Drogheda and collected debts along with young associates. He had just received his first custodial sentence; four months imprisonment suspended after a campaign of intimidating and terrorising a family from the Co Louth town.

A report published just last month – Building Community Resilience, a response to criminal networks – was effectively an academic study of the type of life Keane Mulready-Woods was involved in. It documented a dynamic where peer pressure, the need for money and desire for status trapped young boys into a vicious circle from a very early age.

Children as young as 12 were a key component of the gang structure and day to day operations. In some cases young children were involved in plans that resulted in murders, according to one Garda interviewee.

Another Garda member said some of the boys who eventually became involved in gangs had been warned repeatedly not to do so. However, they saw friends given money for trainers and other sports clothing by older gang members, as well as cash payments and at times free cannabis so gang-affiliation seemed attractive.

“Probably 80 per cent of them are using cannabis at least and probably were since they were 14 or 15 and have moved onto at least coke now and maybe some others,” one Garda familiar with youth offending told the researchers.

“So the debts . . . they don’t have any ability to earn money to pay for the cannabis at that age so they are obviously going to get into criminality to pay for that. So that’s where it starts.”

Another Garda member interviewed for the report said young boys dealing drugs on the streets were “stood down” from those positions for a period if they were caught with drugs or had otherwise drawn Garda attention. Other boys were then deployed to fill that position, with the same process occurring if a young street dealer was sent to prison or detention.

The older criminals who controlled them also had significant control in the community. They often policed their local areas and banned some crime types that would draw the unwanted and unnecessary attention of the Garda. They control the teenage foot soldiers through a combination of financial rewards, and as well as intimidation and violence when required.

Some activists said when they needed to consult with the community they had no option but to go through the senior criminals as it was they who had control and influence.

One of the gardaí interviewed for the research said young people in gangs initially came together in large and sometimes loose networks because they lived in the same area, went to school together or part of the same large family networks.

Another garda said young boys were being used by the older gang members to deal drugs on the streets as well as for storing drugs, burning out cars as a means of intimidating others and even forcing some families out of particular areas. The young gang members were also deployed to extort money with menaces from construction sites and had in some cases become involved in murder plans.

Another garda described the dynamic of crime gangs with young boys on the lower rungs in these terms: “It maintains itself because the lads at the top don’t allow themselves to get caught doing anything so . . . the head of the snake is always there where everyone else below it is replaceable.”

A community activist working in Dublin with at-risk young children said even those children just starting out in criminal networks were aware of cartel leaders and were drawn to their negative glamour.

“Some of the young ones I’d be working with; even though they never met some of the cartel they talk about they really believe they have a strong connection with this cartel. That’s who they aim to be like.”

Another community worker added: “I find that the younger people that are coming into that [criminal] culture are finding a sense of belonging [in local crime gangs] that they are not meeting in their communities.”