Michael Walker: The thing is, it could get worse for Manchester United 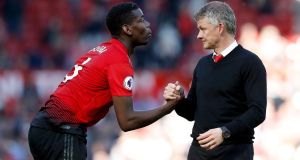 United manager Ole Gunnar Solskjaer and Paul Pogba after the final whistle of the Premier League match against Cardiff at Old Trafford on May 12th. Photograph: Martin Rickett/PA Wire

Down on Sir Matt Busby way it was business as usual last Sunday. Supporters, scarf merchants, burgers, the sun shone on them all as Manchester United prepared to meet Cardiff City. The last day of the season. It all seemed benign, content even.

Appearances deceive. The United We Stand fanzine was on sale. Its opening line is: “In almost 30 years of United We Stand, I don’t think I’ve ever sat down to write this editorial feeling as despondent about Manchester United as now.”

There were some smiles. Towards the back was a droll article on a previous last-day game not so long ago: WBA 5-5 Man United. Romelu Lukaku (20), scored a West Brom hat-trick.

It was May 2013, and Alex Ferguson’s last game in charge of United. Evra, Ferdinand, Giggs, Scholes, Vidic – they were on the bench. United had won the Premier League more than a month before, and had tailed off a little. They still finished 11 points clear of Manchester City. Liverpool, seventh, were 28 points adrift.

“Remember when?” was the title of the piece, and they all do. Because it was not that long ago.

And yet as United passed the ball around with neither accuracy nor urgency against Cardiff, it felt like a distant era.

That the mighty Manchester United have fallen is not news; that they have fallen so far is.

Having squandered the chance to reach the Champions League places with misfit performances at Everton and Huddersfield, among others, the sense of a team and club going through the motions was unmistakable.

As Ferguson sat watching you wondered what he made of it. Remember, he called his Aberdeen players “a disgrace” after the 1983 Scottish Cup final against Rangers – which Aberdeen won. That was 10 days after they had beaten Real Madrid to win the European Cup Winners’ Cup. “Our standards were set long ago, and I’m no gonna accept that from any Aberdeen team,” he said. That was Ferguson’s post-match interview on the pitch.

Compare that fire, that ferocity, to Sunday’s ambling, flabby effort, with a red defence as static as stone roses.

The thing is, it could get worse. When the final whistle blew on the season, United had come sixth, 32 points off City. United conceded more goals than Crystal Palace; their points total was 66 and only once since 1995-96, when the top division returned to 38 games, have United got less – in 2013-14 immediately after Ferguson. The David Moyes season.

The club was clearly acclimatising to Ferguson’s departure then. And yet five years on it looks more vulnerable. Weak and disorientated, trailing at the back of the top six, next season United could be picked off by hungry clubs such as Wolves, Everton or Leicester.

To contrast today with the club’s recent past is not unfair, it is natural. Another contrast is with City’s – and Liverpool’s – present. And then, perhaps most worrisome of all for Old Trafford, is the contrast in futures.

City’s and Liverpool’s look set. They have appropriate, high-calibre managers in place, settled but growing teams, a recruitment system that provides more good buys than goodbyes and an organisational structure that supports this. Financially they are assured. The two clubs are ready to dominate.

At Old Trafford, none of the above applies. Ole Gunnar Solskjaer was like an aspirin when he came in last December to replace the headache José Mourinho had become. But medicine wears off, and some of Mourinho’s gripes about the real state of the club re-emerged. United were in the same condition, it turns out, some personalities had merely roused themselves to get through the day.

When they did, they displayed levels of ability which made the end-of-season slump harder for fans to witness.

Anthony Martial, for example, has the potential to be a high-end footballer, but he looks disinterested. That people still argue over what Paul Pogba does is like trying to explain a punchline to a joke. It’s not a good sign.

What it all reveals afresh is the importance of the manager and the structure around him. How would Martial be playing if he was at Liverpool managed by Jurgen Klopp? At City under Pep Guardiola?

That is not a slight on Solskjaer, who at least temporarily provoked more from Martial, Pogba and the rest. For a while Victor Lindelof was receiving widespread praise, Lukaku too.

There was a lapse into nostalgia – Stone Roses, the Cliff, anniversary kits, Solskjaer as Nou Camp legend – and sometimes that’s fine, understandable. But if overdone people forget today while relishing yesterday, and tomorrow you can wake up without a plan.

So the questions come. If Solskjaer is not the problem, is he the solution? What happened after the high of Paris St-Germain? How come the subsidence was so great it led to Goodison Park? To Huddersfield? To this embarrassing meandering waddle at home to relegated Cardiff?

On March 28th, Solskjaer signed a three-year contract: had he not done so would the club be offering him the job today? Deep down many United fans fear 10 games into next season they may be requesting Ole hands over the wheel. That will be personally damaging for Solskjaer, who is not in this for the sake of ego. But it will be damning of those who run the club and milk it.

Solskjaer’s impact from December to March protected the boardroom. The Glazers and Ed Woodward, United’s executive vice-chairman, benefited from the release of joy Solskjaer sparked. It distracted people from talking about the state of Manchester United as a management structure, as a squad and, when it came to Old Trafford, as a stadium in need of upgrading.

Seven weeks on, none of that has changed. So from where come the answers?

Solskjaer? He needs help. But where is the football intelligence at the apex of the club, where is the nous that once acquired Nemanja Vidic for £7 million? Patrice Evra for £5.5 million? How come Solskjaer is querying players’ basic fitness? There are reasons for all these question marks.

On Thursday the club announced its latest financial figures. Big numbers everywhere, talk of an app, commercial deals. But last Sunday there were gaps in the stands and that can happen again. Some may forget United’s commercial strength stemmed from the pitch and not the other way round, but fans do not.

Glibly, you could say it will be a long summer at Old Trafford. But it might not be long enough. Should Man City lose to Watford in the FA Cup final today, United will find themselves playing Europa League qualifiers in July, like Burnley last year. Even if City win, United will be playing Thursday-Sunday, trying to find a rhythm while watching the Champions League on TV.

It means United will be wishing City well at Wembley.

What a state they’ve got themselves into down Sir Matt Busby Way.