Homeless in Cork: ‘Everybody can list friends who have died’ 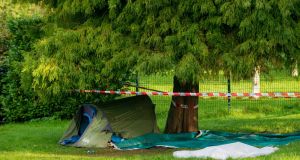 Shortly after 10, volunteers and service users gather there for a moment’s silence. An older man takes to his knees, another man on crutches leads a Hail Mary, and a Polish man with a bruised and cut face says a few words about Timmy.

Cork’s homeless and the people who help them can list the names of friends who have died on the streets. Cork is a small city. Everybody here knew Hourihane, a former chef who died after a brutal assault last weekend.

Bernadette McMahon, one of the organisers of this group, recalls him, “kissing my hand and calling me a princess” for giving him dry clothes. She mentions another man she befriended who died before Christmas. “How could anyone hurt them?”

“When the same people show up every night, it comes to a point that it’s a relief to see them because you know they’re safe,” says fellow volunteer Deirdre Barry. “And if they don’t show up the conversation starts: ‘Has anyone seen such and such for a while?’”

“There are people I trust and we stick together in a group to stay safe but there are a lot of bullies out there,” says a 37-year-old homeless man named Mark. He points to a man in the crowd around the stalls. “He took my friend’s dole from him the other week.” He watches the man warily. “I stay away from bullies. I’ve everything I own in this bag, and nobody is getting it.”

Mark has a list of courses he’s completed but he’s hampered by a string of charges for petty offences. He talks about queueing up at night to get a space in emergency accommodation and sleeping in wet tents, and how difficult it is to stay sober when you’re cold and frightened.

“I hope I find somewhere before I’m too old,” he says. “There are some people and they’re… what’s the word? Institutionalised. I know fellas who got houses and they’re still out in the streets all day.”

Out at Mardyke Walk, the group of tents where Hourihane was assaulted has been cleared and the homeless people who lived there are, for the moment, scattered. People have left flowers on the path near the police tape.

According to Dermot Kavanagh, the director of Cork Simon, there’s been a 32 per cent year-on-year increase in homelessness in Cork, and the emergency shelters are working over capacity.

In a 2017 interview, Hourihane called Caitriona Twomey “the most beautiful heart in Cork city”. She runs the long-running Cork Penny Dinners service on Little Hanover Street. She’s a warm person who seems to have a specific quip for everyone who walks in the door. “I was fond of Timmy. I knew him so well and for so long,” she says.

Diners sit on long pews and eat four-course meals. Penny Dinners also provides people with clean clothes (“We help out a lot of people who need clothes for interviews,” says Caitriona), brings hampers to families in temporary accommodation and sends teams to check on people on the streets. Soon they will open up new accommodation for six recovering addicts.

On the wall, there’s a picture of beloved former regular “Dublin John” who also died last year and a picture of Cork Penny Dinners as it was decades before, populated by older men. Now the age profile of homeless people is getting younger and there are many women and non-Irish people on the streets.

Caitriona introduces me to several people while I’m in Cork. Gerard Sheehan’s 53-year-old brother Paul died in 2018. He tells me how Paul struggled with alcoholism for decades and couldn’t keep a flat.

“He was gentle and kind,” says Gerard. “He’d always bring other homeless people back, and some would cause trouble. He never caused trouble himself.”

Towards the last years of his life, Paul’s health deteriorated and Gerard and another brother Anthony met him every day to help him access services. How did he die? “Paul would never sleep in doorways because he’d be attacked. I got a call one day that he got attacked by a hatchet. He’d go away from the main thoroughfares to avoid the crowds coming out of the pubs. The general public are always hassling them and kicking them. So he went off to lie down to sleep near here.”

His voice gets quieter. “He died from being out in the cold really… I still haven’t got over it.”

Caitriona also introduces me to Helen (not her real name) who became homeless after she separated from her husband and their house was taken by the bank. She moved in with her father but one night he called the guards and had her evicted.

“If I had a child I would never, ever do that,” she says. “I found myself out on the street at half one in the morning with a black plastic bag and my dog and no idea where to go.”

Helen doesn’t have addictions or mental health issues, but she has injuries from a car crash and so is physically vulnerable. She found herself accessing late-night emergency accommodation “on the floor with 18 other people. I was absolutely terrified”.

She tells me about being threatened and bullied. She tells a story of how a man assaulted her partner, Donal, when he tried to protect her. Her voice cracks a little.

“I got raped four months ago,” she says. “I didn’t get in [to the shelter] earlier that night, and I walked back out the road into town to go to an internet café and someone grabbed me from behind. I went up to hospital, did the whole rape kit. The whole thing…

“What I’ve been through the last couple of years.” She shakes her head. “But I’m trying to fight it.”

She says she has spent every day since being made homeless lobbying for a place, and she and Donal were recently given a temporary flat.

The nights after Hourihane’s death they took in a young scared homeless man who usually slept in the tents on Mardyke Walk. “He’s gay and very vulnerable. That’s the one thing I have to say about homeless people. We look out for each other. When I was in [the shelter] I used to be putting sunscreen on the drinkers in the morning so they wouldn’t get sunburnt.”

On Tuesday evenings at Penny Dinners there’s a rehearsal of the High Hopes choir, an offshoot of the Dublin group established by David Brophy, followed by a meeting of an addiction recovery group. These men, some homeless, meet to support each other, talk through their problems and, in one man’s words, “find a new way to live”.

“We’re doing things we couldn’t do for years,” says Tommy. “Even being able to walk around with my head held high is a big thing for me. I went around for a long time with my head looking at the floor, afraid to look someone in the eye.”

“Drugs damaged me big time,” says Conor. “I was full of paranoia. You couldn’t trust me when I was using. I’d rob you blind.”

“I took my child’s PlayStation and sold it,” says another man. “And I did worse than that.”

“I know you’ve your story to write,” Conor says to me before I go. “But be mindful of how you present it because we have feelings… Please tell people this space is here for anyone who needs it.”

At the High Hopes choir practice there are about 30 people, including many who are coming out of addiction and homelessness. “Any new faces?” asks the director Fabrice Fortune.

“Me!” jokes Olive Morris, one of the volunteers.

Fabrice guides everyone through performances of Sunny Afternoon, Kiss, Suspicious Minds, Sitting on the Dock of the Bay.

A man named Pa arrives late. He asks for a lyric sheet, and is accidentally handed someone else’s arrest warrant. He has a sense of humour. He sings the contents of the arrest warrant to the choir’s rendition of the Hothouse Flowers song Don’t Go. Everyone cracks up. Afterwards he says, “I got the fright of my life. I thought it was for me.”

Caitriona says that starting this branch of the High Hopes choir is among the best things they ever did. Everyone here, she tells me, either works with the service or has issues with homelessness, addiction or mental health. “But everyone has their issues, actually,” she says. And yes, almost every volunteer I meet in Cork has their own stories of bereavement, addiction or illness.

“Let’s do Everybody Hurts,” suggests Caitriona, after a while. “Because it’s true,” she adds. “Everybody does hurt.”

And then, once again, everyone sings.