Fintan O’Toole: What will EU demand for supporting us on Brexit?

In backing Ireland on the Border, the EU has been acting in its own interests too 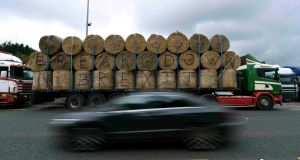 A lorry at the Border town of Carrickcarnon has a slogan marked on it during a protest by anti-Brexit campaigners Borders Against Brexit. File photograph: Clodagh Kilcoyne/|Reuters

Three short Latin words float around in the subconscious of Irish politics: quid pro quo. If you write and talk about Brexit, the question will always pop up – what will the European Union want in return for its rock-solid support for Ireland on the vital matter of the Border?

That support has indeed been remarkable. It has gone much further than British governments ever expected – they thought it would melt away in the heat of last-minute deal-making. It has, in truth, been much more steadfast than most Irish people thought it would be – the fear of betrayal was never far beneath the surface.

And perhaps this very unexpectedness brings with it that anxious question. Is there a catch? If and when this all settles down, will the EU come looking for a pound of flesh?

If we go back to the immediate aftermath of the Brexit referendum in June 2016, Ireland faced a momentous choice. Crudely, there was the London option and the Brussels option. Ireland could try to solve the huge problems created by Brexit (or at least limit the damage) largely by engaging directly with the British government.

Or it could gamble on making Irish concerns into European concerns, trusting the EU to fight our battles for us.

In retrospect, the Brussels option seems quite obviously to have been the right one. But at the time this was not obvious at all.

On the one hand, Irish politicians, diplomats and civil servants had, by and large, excellent relations with their British counterparts. Ironically, those relationships had been forged in large part in the process of working together within the EU. The peace process had both drawn on and deepened those experiences of close co-operation.

On the other hand, Ireland had a recent and traumatic experience of being one of the main fall guys for the euro-zone banking crisis. Even the much-dreaded International Monetary Fund had been much more sympathetic to Ireland’s plight than our “gallant allies in Europe”: the European Commission and the European Central Bank.

Between these positive and negative histories, there was a real case for the London option: engage quietly with the British and come up with some formula which could then be proposed jointly to Brussels.

But there were also two very good reasons not to do this: power and trust. In any direct negotiation with London, Ireland would always be the weaker party. And the British could not be trusted. This was a matter, not of the good faith of individuals (though that did become a huge question later), but of the basic calculation as to whether British politics, thrown into such profound disarray by Brexit, could deliver on any understanding.

So the Brussels option was chosen: get the EU to make a solution to the Border question a primary condition for any withdrawal agreement and bank on it not to waver. It turned out to be entirely the right decision. But at the time, it was a gamble.

The British certainly thought it was a long shot – their strategy was based on the assumption that at the last minute (when they believed the real negotiation would happen), the needs of European businesses (especially the totemic German car makers) for access to the British market would trump the needs of obscure Border communities.

They turned out to be completely wrong. They console themselves with the thought that Ireland will in the near future pay with its soul for the Faustian bargain it made with Brussels.

But are they right? The big thing to reckon with here is that the EU was not being merely altruistic in sticking by Ireland. It had real interests of its own at stake in the Border question.

One was the obvious but often overlooked reality that the EU is mostly made up of small countries. The British have always seen it as a Franco-German axis, but three of its six founding members (Belgium, Holland and Luxembourg) were small states. Of the 28 current members, 19 are countries with populations under 11 million people. Eight are even smaller than Ireland.

For the EU to be seen to abandon or betray one little member state would have sent a message to the rest: when push comes to shove, your interests are of no great account. The long-term damage would have been disastrous.

Second – and the British never took this remotely seriously – the EU really does need to understand itself as a peace project. When the German foreign minister, Heiko Maas, told Irish diplomats last January that the Irish peace process is a matter of German national identity, the British probably thought he was being ridiculously sentimental.

But, for obvious reasons, European peace is a deeply embedded German priority. The EU helped to build it after the second World War and again after the end of the cold war. The Irish peace process can be understood in this context as part of a wider continental story.

Being able to insert Ireland into the heart of the Brexit negotiations gave the EU a moral purpose that helped it to hold together in the face of the shocking departure of one of its biggest members. In this sense, Ireland has been just as good to the EU as the EU has been to Ireland.

And third, of course, if Brexit happens the Border will be not just an Irish frontier but a European one. The EU grasped quickly that its main border with the UK was to be in the worst possible place, a borderland that is contested, unsettled and demonstrably incapable of being policed. There are very solid practical reasons that the EU would not want its primary line of defence against a new deregulated Anglo-American trading zone to be built on the political quicksands between Newry and Dundalk or Strabane and Lifford.

This is not to say that Ireland’s relationship with the EU will not change radically after Brexit. It will

So while Ireland has much to be grateful for in the solidarity shown by its EU partners, we should not sentimentalise what has happened. That solidarity is not a pure act of benevolence – it is rooted in the EU’s own medium and long-term interests. It is not a favour that has to be returned. There is no quid to this quo.

This is not to say that Ireland’s relationship with the EU will not change radically after Brexit. It will. It will change, not because the EU is calling in Ireland’s debts, but simply because of Brexit itself. Ireland won’t have Britain to hide behind anymore.

It will have to deal much more openly with the necessity for the EU as a whole to stop giant corporations avoiding taxes. It will have to accept a logic of greater EU integration in some areas. The dynamics of power within the EU will have shifted and Ireland will have to shift with them.

That is the price to be paid, not for the EU’s solidarity in this crisis, but for the fact that Ireland is staying in the EU, even if Britain departs.