Fintan O’Toole: In today’s Ireland, happiness is a tough gig 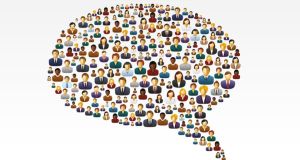 Ireland: what do we do now, now that we are happy? Illustration: iStock/Getty

Somewhere in 2019 Sign of the Times survey is lurking the unanswered question from Samuel Beckett’s Waiting for Godot: “We are happy. (Silence.) What do we do now, now that we are happy?”

The study is an annual snapshot of Irish life commissioned by the research agency Behaviour & Attitudes, and its findings for 2019 (the research was undertaken in January this year) are published in The Irish Times today.

Irish people have always craved a kind of normality – we fled in vast numbers from our own uniqueness and fitted ourselves into British or American modernity. Here we are now safely harboured in the port of global ordinariness: urban, wired-up, consumeristic, aspirational.

But beneath the waters there are deep currents of uncertainty.

In some ways the paradox of Ireland right now is that its very ordinariness is a kind of exceptionalism. In a mad world, Ireland can seem quite exceptionally sane.

The countries we still look to most – Britain and the US – are at least half-crazed. The EU is riven by the rise of ethnic nationalisms and the far right.

Viewed through the wide-angle lens of history, it is hard to think of a time when Ireland was apparently more free of angst

By contrast, Ireland seems to be in a good place. Even with no parliamentary majority, the Government has been remarkably stable. Unemployment is relatively low. The Troubles remain a bad memory, albeit one that is prone to painful recurrence.

There has been a tentative but real recovery from the great banking and property crash of 2008 – the “lost decade” is officially over. The big internal political events of recent years – the referendums on same-sex marriage and abortion – were less divisive than most people thought they would be and produced clear majorities for progressive change.

Indeed, viewed through the wide-angle lens of history, it is hard to think of a time when Ireland was apparently more free of angst.

But the question itself seems to contain a certain pride. The Irish had a sneaking regard for their own craziness. All the manias of unresolved nationalism, of sexual repression and of hyper-Catholicism also made us different, distinctive and, in our own estimation at least, charmingly colourful.

And now we seem less half crazy than most countries. The 2016 commemorations of the 1916 Rising suggested a society that is, for the most part, reasonably at ease with the complexity of its nationalism. Sexual repression, at least of the old sort, is long banished. Hyper-Catholicism has been replaced, in urban society, by everything from utter indifference to opportunistic affiliation.

We are, broadly, contented. The latest edition of the World Happiness Report, published last month, places Ireland 16thof 156 countries, below (of course) the Nordics, but slightly above Germany and the United States.

We should remember, when we look at the Sign of the Times report, that some of the key reasons Ireland is in a good place relative to its history are to do with basic demographics.

A central fact for much of the modern period has been population decline – Ireland remains one of the few places in the world where the population is still smaller than it was in 1840.

But we are in the midst of a long, slow recovery. Between 2008 and 2018, the population rose by 380,000. That’s the equivalent of nine new towns the size of Ireland’s largest, Drogheda.

This is striking when we remember that these were the years of collapse and austerity – more people left the country than came to live here between 2010 and 2014. And it is not something that can be taken for granted: 10 EU countries (mostly in central and eastern Europe) experienced population decline over the same period.

Ireland remains young. The population is certainly ageing, but 62 per cent is under 44 and in every recent year we’ve had more than half a million kids in our primary schools.

That in itself has a big bearing on how we feel about ourselves. With so many people of working age, it follows, in a functioning economy, that you get record levels of people at work: currently 2. 3 million of us are in employment.

Younger people also tend to be healthier, and health really does mean happiness. With rising standards of education generally, younger populations are, similarly, likely to be better educated, and Ireland has been particularly good at pushing people through college. More than half of Irish people aged between 25 and 34 have a third-level education compared with the EU average of 38 per cent.

So demography alone creates a certain natural buoyancy. If you fed these population figures into a computer, added the relatively low level of unemployment, and asked it to calculate the general levels of contentment, it would surely come up with something close to the big picture results of the survey: 61 per cent of people feel they do or will have a better life than their parents.

This may seem a very broad question but it is arguably the crucial one. The perception that life is getting worse for people who have a notion that things were better before is one of the great drivers of the fear that is being exploited by the far right internationally. It creates a nasty and unstable cocktail of status anxiety and nostalgia for an imagined past.

How, then, does this 61 per cent positive response in the Sign of the Times survey compare with the rest of the world?

A large-scale Ipsos study across 23 countries in 2016 gives us the bigger picture: no European country reaches these Irish levels of positivity. In Sweden, 52 per cent expected a better life than their parents; in Germany 50 per cent; in the US 49 per cent; in Britain 43 per cent and in France just 21 per cent.

In this one figure we may see the primary reason why Ireland has so far stood out against the international trends of rising support for xenophobic nationalism. Perhaps in this we might even be reaping a misery dividend – if you think life was pretty bad in the past (which for very many people in Ireland it was) you are more likely to feel good about your own status by comparison.

But how stable is this optimism? The survey makes it clear that Ireland looks rather like a swimming duck – an apparently smooth glide on the surface hides a great deal of frantic paddling below.

There is nothing smooth about the relative economic equanimity that mainstream Ireland is achieving: the biggest group of respondents (49 per cent) are just “getting by”. A majority (53 per cent) finds the pace of contemporary life “too hectic”.

So even in the relatively successful part of Irish society, there is no sense of ease. Leading what we like to call a “comfortable lifestyle” demands a great deal of discomfort: working hard, paying very high prices, keeping going.

It is telling that only 37 per cent think they are in fact “living comfortably”.

And beneath these norms, there are stark divisions. They are evident even in the way the survey itself is framed. One very obvious division is in relation to house prices. If you own a house, the expectation that it will rise in value is a cause for optimism. If you are dreaming of buying one, that same expectation is a cause for despair.

So the answer to the question “Do you expect your assets (your house, shares, pension entitlements, savings) in the next year to be higher, lower or the same as in the past year?” can be read in two quite different ways.

Given that a house is the primary asset for most people, it is “good news” that those who have one are “more positive” in their expectations. But it is “bad news” for those who don’t.

It is striking too that even “getting by” is beyond the reach of so many people. It is not just that there is a clear divide in personal economic expectations between Dublin and provincial Ireland, but that 32 per cent do not see the economy benefiting themselves and 14 per cent are “struggling”.

And these economic divisions interact in complex ways with cultural anxieties. Two results stand out in particular. One is the extraordinary polarisation of views about religion.

One might expect that most people would be neutral on the question of whether religion does more harm than good since it is a rather fine judgment. But only 29 per cent are, with the rest coming down hard on either side of an equal divide. This is extraordinary in a culture that was until recently so outstandingly religious.

This may in part account for the other disconcerting result – the cluster of responses that suggest a deep unease at the pace of cultural change. Very large numbers feel that “everything is changing too quickly”, that society has become “too politically correct”, that #MeToo has “gone too far” and that “Ireland is losing its sense of identity with influx of foreign nationals”.

These findings suggest that while Ireland has moved away from religion as the centre of its cultural identity, it has not fully accepted social liberalism as its alternative belief system.

If the economic optimism we are working so frantically to maintain begins to falter, there is surely the potential there for Ireland to go at least as half crazy as everyone else.