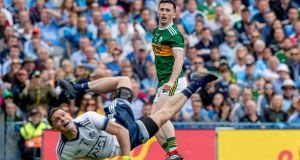 Five-in-a-rows don’t come easy. The new empire stalled and yet the old one didn’t quite strike back. Prospects of the fabled sequence still live on but so does the chance to send it the same way as all previous attempts.

Dublin, down to 14 for 40 minutes, and Kerry fought out a primal All-Ireland final with the traditional roles of monarchs and pretenders reversed until with the nerves of 82,300 spectators jangling like alarm clocks, a last-minute Dean Rock free from a position more akin to a line-ball, drifted to the left of the Canal End posts and David Gough – after all the unseemly publicity that had shrouded his appointment, looking as relieved as the teams that there had been no losers – blew full time to send everyone off to get ready for a replay in a fortnight.

Gough did well in what had been a difficult appointment. His sending-off of Jonny Cooper was indisputable but he should have followed suit with Kerry’s Tom O’Sullivan for a pull down in the second half when already on yellow.

Otherwise he began to get more permissive in his calls as the match wore on and Kerry, for their part, were unhappy at not getting some late frees and a penalty in the 45th minute when Jack McCaffrey turned over Stephen O’Brien and Michael Fitzsimons, managing David Clifford quite well apart from the 50th-minute point when he got turned like a corkscrew, cleared.

Ultimately, Dublin were bailed out by Stephen Cluxton’s goalkeeping and an electric performance from McCaffrey, whose 1-3 helped to salvage a performance in which the forwards managed just one point from play in the second half.

Both sides could have mixed feelings about the outcome. Kerry failed to exploit their man advantage after Dublin’s defensive orchestrator Cooper had received a second yellow in his unavailing efforts to mark Kerry’s enfant terrible Clifford, whose frustrations at that stage had been more down to his having an unproductive day by his standards than any of Cooper’s interventions.

His marker had already been ticked and yellow-carded by the 17th minute, the first infraction bringing a penalty, which Paul Geaney took, shot tamely and Cluxton – fairly conspicuously off his line – saved acrobatically to his right, bringing his left hand over.

In the list of things Jim Gavin will want to address are likely to be the number of goal chances – five! – given up by his defence, which until the final had conceded just one from play.

The first, as early as the sixth minute, came after Clifford had caused consternation in the Dublin defence and the ball fell to Geaney whose shot was taken off the line by James McCarthy. Stephen O’Brien lashed a shot at goal in the 14th minute but it flew over.

In the second half, Paul Murphy, pushing up from the back had a goal chance from 10 metres but Cluxton got a fingertip to the 40th-minute shot and deflect it on to the bar.

This litany of missed opportunity means that Peter Keane will have plenty to regret when he reviews the match. He will also know that in a strange closing phase to the match, Dublin largely controlled the play and despite leading by a point in the 66th minute, Kerry went the 11 minutes until the end dropping back. Defending one-point leads in All-Ireland finals is not a great idea and not only did Rock equalise but the champions had a couple of chances to win.

Cormac Costello, no stranger to deus ex machina interventions on the big day, had one that was awarded and then chalked off by Hawk-Eye and Diarmuid Connolly pushed wide what looked like it might be a score to break the internet.

So what went wrong for the champions?

For a start their key operatives were subdued. Kerry sprang one late change, bringing in Jack Barry to try and repeat the spoiling jobs that he had done so notably in the past on Brian Fenton. There was skepticism that he might be able to repeat that class of a restraining order.

There was little fixed in the centrefield contests and David Moran made a good contribution both in defence and going forward but Fenton was as quiet as he has ever been in a championship match since his debut year in 2015.

Barry also took on the Cluxton kick-out and claimed two successive marks within a minute. Up front Seán O’Shea took up the slack. His flawless free taking kept the scoreboard going and he was also accurate from play.

Dublin’s next issue was up front. Rock delivered yet again in a final, shooting three from play and making himself available as a kick-out target but Paul Mannion after a bright start wasn’t able to maintain his season’s form for which Tadhg Morley deserves great credit and was eventually reduced to hit-and-hope shots, which given the day that was in it, inevitably didn’t go over.

Con O’Callaghan gave Tom O’Sullivan a world of trouble but scored just once himself as well as providing some good decoy running and earning a couple of converted frees.

The day was saved by McCaffrey’s blistering inputs, flying through in the 19th minute after the exceptionally influential Brian Howard, partly a sweeper and partly a re-start target, had taken a great catch and the ball went from Ciaran Kilkenny to Niall Scully to the breaking wing back who finished calmly to the net.

A 1-9 to 0-8 lead at the break was Dublin’s insulation against being a man short and for a while.

Kerry’s unambitious use of the extra man gave McCaffrey the chance to play sweeper in the second half – he had earlier made his way through the marking of Adrian Spillane and Gavin White – and he cashed in on the effective invitation with three points. Dublin were five ahead in the 55th minute but the day’s only five-in-a-row saw the challengers eliminate the gap with 1-2 in five minutes.

Replacements Tommy Walsh and Killian Spillane were the sharp edge of the comeback. The latter turned Howard and finished for 57th-minute goal and Walsh and O’Shea made short work of the deficit.

On the verge of sensationally taking down the champions when leading in the 66th minute Kerry stalled. Dublin steadied and took control. It was enough to save their dreams and ambitions but insufficient to realise them for another two weeks anyway.