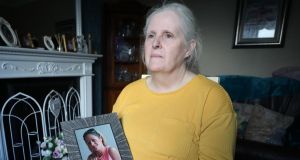 Carol Connors holds a photograph of her daugher Anne Marie who died of a drug overdose in supported accommodation. Photograph: Nick Bradshaw

Two children were alone with their mother’s body overnight and most of the following day in their homeless accommodation in south Dublin last year, it has emerged.

Anne Marie Connors (30) died of a drug overdose in supported accommodation in Churchtown on the night of April 17th/18th, 2018.

Her body was discovered by staff at 4pm on April 18th, along with her children then aged 10 and five, at Camberley House, owned and managed by Sophia Housing.

According to clinical details referenced in a postmortem report seen by The Irish Times, Ms Connors was “found dead in her apartment” at a “shelter for the homeless”.

Pathologist Dr Michael Jeffers reported “opiate toxicity” as the cause of death.

Dublin Fire Brigade (DFB) received an emergency call at 4.40pm, a spokesman said. “Two units, consisting of a DFB ambulance and a fire tender were dispatched. The first unit arrived on scene at 16:43.”

A Garda spokeswoman said gardaí from Rathfarnham were called to the scene at “approximately 7pm”.

Sophia Housing was founded in 1997 by Jean Quinn, a member of the Congregation of the Daughters of Wisdom. It now provides supported housing to homeless families and single adults in Dublin, Cork, Limerick, Wicklow and Sligo. It also runs a family hub on behalf of the Dublin Region Homeless Executive in Donabate, Co Dublin.

Anne Marie (known as Annie to her family) and her children, had been homeless since September 2015, according to her mother Carol Connors, who says she left the family home in Sandyford, Co Dublin due to overcrowding.

“There was tension. Annie couldn’t take it anymore,” says Mrs Connors. “She went down to [Dún Laoghaire Rathdown County Council] and told them the situation. She was on the housing list...11 years.”

For a month Annie, was “self-accommodating” – booking hotel or B&B rooms night to night from a list provided by homeless services.

In October 2015, she was placed in a B&B in Rathgar where visitors were allowed. Carol could bring shopping and help with the children, especially her older child who has autism and can be challenging.

Early in 2016, when the B&B closed, the family was moved to supported accommodation in Blackrock. Visitors were not allowed.

“She was miserable, but she didn’t want to be causing upset because it could go against her,” says Mrs Connors.

In March 2017, she was asked by text to leave after an incident with her son and another child. They were moved to a B&B in Clontarf.

“She was there three or four weeks. They had to be at the bus stop at 6.45am every day, travelling two buses to get to school. I rang her one day and she was crying outside the school, saying, ‘I can’t do this anymore’,” says Mrs Connors.

Anne Marie had spent nine months in residential drug rehabilitation in Co Wicklow in 2014 but Mrs Connors believes she may have started using drugs again around this time.

“I think she had postnatal depression since her son was born that never really lifted,” she says. “Most of the time she was okay in these places but in Clontarf she struggled terrible. The boy was very hyper and all those buses.”

In May 2017, Anne Marie was moved to Sophia Housing in Churchtown.

“We were delighted because it was nearby but again she wasn’t allowed visitors. They were really, really strict on that.” A former resident at the time of Anne Marie’s death who does not want to be named confirmed visitors were not permitted.

Mrs Connors last saw Anne Marie on the afternoon of Monday, April 16th, 2018. “She was looking awful, not looking after herself. I was really worried about her.”

She recalls going to her local church on Wednesday, April 18th, before cooking dinner for her husband John and son Jamie. She was clearing the meal away when two gardaí arrived at the front door.

“I walked out into the hall and Jamie just said, ‘Annie is dead.’ I started screaming,” she said. “I knew it was only a matter of time.”

The family were taken by gardaí to Churchtown.

“We walked in, back into the office, past Annie’s room.”

Mrs Connors’s grand-daughter was sitting on the one of the worker’s laps, crying. Her grandson was lying on the floor.

“I went over and rubbed his back and said, ‘Mammy has gone to heaven’. I remember his face looking up at me and when he saw I was crying, he showed me his toy and started telling me what it could do.”

Her daughter had taken the children out the previous day and bought them toys. It was school Easter holidays.

“They came back. She made them noodles and went into the bathroom and never came out.”

Her grandson has not talked about it since, she says, but her grand-daughter has told her what she remembers about what happened to her and her brother – whom she calls “brud bruds”.

“She said: ‘Me and brud bruds were eating our noodles. Later I needed to go wee and I couldn’t because Mammy was staying in the toilet. So I had to wee in the mop-up’.

“They obviously didn’t know what to do. The rules were that they weren’t allowed out of the room unsupervised.

“She said: ‘The next morning Mammy was like ice cubes and I said to brud bruds ‘Mammy is dead’.”

Mrs Connors says she thinks her daughter was found after the boy wandered out. He was seen outside the room on CCTV footage. “Someone came down to the room to see what was happening, and that’s when they found her,” she said. “There were drugs involved. I’m told there was a needle and almost all her prescription drugs were gone. It looks to us like a kind of suicide.”

The family believes she had “fallen into despair” about her situation.

“She kept saying, ‘If I could just get a house I’d be okay’. She was terrified of asking for help, thinking it would be a mark against her. She felt judged enough already for being homeless.

“It is terrible she wasn’t allowed visitors. The worst thing for a recovering addict is isolation. I understand there has to be rules but the generalisation, no visitors at all for anyone, is not right.

“The fact she was left there, dead for so long shows how isolated she was,” she said.

The children are now in the care of Mrs Connors.

“They did play therapy here and then a year after she died, bereavement counselling.

“The counsellors say there’s no sign of trauma with him [Mrs Connors’ grandson] but he puts his hands over his ears and cries, ‘Don’t want to talk about it’. He suppresses it.”

Tony O’Riordain, chief executive of Sophia Housing, said the case was under investigation and he would not be commenting further.

Neither Dún Laoghaire-Rathdown County Council nor the Dublin Region Homeless Executive would comment on the case.

An inquest into Ms Connors’s death will take place at Dublin Coroner’s Court on January 17th, 2020.