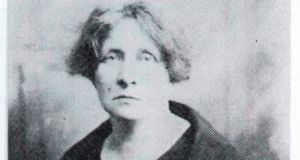 Born into a middle-class Dublin family, Helena Molony became one of Ireland’s most committed trade union, republican and feminist activists.

Her first formal political activity took place through Inghinidhe na hÉireann, a radical republican women’s group which she joined in 1903. By 1908 she had become its secretary and editor of its feminist-republican newspaper, Bean na hÉireann. Molony was unequivocally pro-suffrage but clashed publicly with the feminists who, in her opinion, put gender before nationality.

She was especially critical of the women who looked to the British parliament for reform, but continued to support suffrage societies and campaigns, especially the militant Women’s Social and Political Union and the Irish Women’s Franchise League. The talented actress and orator worked at the Abbey Theatre and also appeared on platforms and stages in support of suffrage as well as other political campaigns. Molony became Ireland’s first woman political prisoner of the modern era after her arrest for throwing stones at portraits of the visiting George V and Mary in 1911.

Increasingly socialist, she became general secretary of the Irish Women Workers’ Union in 1915, as well as a very active member of the Irish Citizen Army (ICA).

She was arrested and interned for her role, with the ICA, in the Easter Rising. Molony remained active in republican, feminist and socialist politics after independence, reuniting with her suffragist colleagues in a number of organisations which protested against the social and political conservatism of the new Irish state.