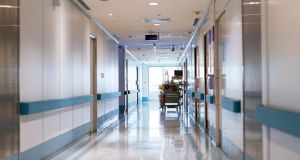 The HSE is looking at a range of options to ensure hospitals can operate safely amid the rise in transmission, its chief executive Paul Reid said. Photograph: iStock

The widespread cancellation of hospital services is expected in the coming days as health authorities struggle with an “unsustainable” rise in Covid-19 infections.

With a daily record of 4,962 cases confirmed on Sunday, pushing overall infection numbers beyond the 100,000 mark, officials are mulling the curtailment of daycase and other elective procedures, as happened during the first wave of the pandemic. Schools may also remain closed next week due to the rapidly deteriorating situation, political sources indicated.

About 10 per cent of all cases confirmed in the 10-month pandemic have been reported in the past three days. GP referrals suggest that further massive numbers are likely in the coming days.

The Health Service Executive (HSE) is looking at a range of options to ensure hospitals can operate safely amid the rise in transmission, its chief executive Paul Reid told The Irish Times.

Describing the rise in hospitalisations and intensive care (ICU) patients – which have both doubled in a week – as “beyond any projections”, he said he was “extremely concerned” about the potential impact of the pandemic on the health service.

Even if people completely adhere to the current lockdown, there could be 1,300 Covid-19 patients in hospital and 300 in ICU by the end of the month, HSE chief clinical officer Dr Colm Henry warned. But Mr Reid stressed the health service is “not overwhelmed” and surge capacity is not yet being used.

There were 643 free hospital beds including 43 in ICU on Sunday morning, which Mr Reid described as “not too bad”.

Chief medical officer Dr Tony Holohan described Sunday’s case numbers as “not only unsustainable for the healthcare system, but also a deeply concerning level of preventable sickness and suffering that we must work together to address as quickly as possible”.

The first vaccines for nursing-home residents will be administered on Monday. Mr Reid said some 4,000 health staff have so far received the Pfizer/BioNTech vaccine, including 2,000 in hospitals in the south and southwest over the weekend.

A further shipment of 41,000 vaccine doses is due to arrive on Monday or Tuesday. Of these, 25,000 doses will be administered immediately with the rest held back for use as second doses, which are given three weeks after the first.

The National Immunisation Advisory Committee is currently examining a proposal to maximise administration of the first dose and to delay the second dose. This has been done in the UK, but experts are divided on the approach.

Regulatory officials are also examining a proposal to allow vaccinators draw six doses from a vial of the vaccine, instead of the recommended five. This would increase capacity by up to 20 per cent.

Deputy chief medical officer Dr Ronan Glynn last night urged workers to stay at home and employers to facilitate this. People should think “like it is March all over again,” he advised.

The Cabinet subcommittee on Covid-19 is likely to meet in the coming days and sources say Ministers and senior officials will also discuss additional restrictions. Government figures are reeling from the rapid deterioration of the situation, with one source saying that if public-health officials recommended schools remain closed for longer, then the Government would follow that advice.

Cluster of stillbirths among women with Covid-19 prompt alerts to maternity staff on precautionary basis 18:22
Covid-19: Face masks should not be compulsory for primary school pupils, Hiqa says 18:10
People with mental illness should be treated close to home, says health body 17:59
Experts disclose secret to fantasy football’s best . . . and the rest 17:45
Dublin woman’s action over hack of Facebook account settled 17:08