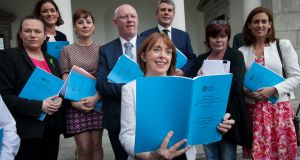 Health committee chair Róisín Shortall TD with health committee members during the launch of the Sláintecare report in May 2017. Photograph: Gareth Chaney Collins

Nearly 200,000 people who have cheaper health insurance plans will see these close on foot of the Government’s Sláintecare reform plan, the country’s largest health insurer VHI has warned.

And such customers will be pressed by the industry to pay up to €300 more for higher-end products, VHI said in a submission to a review group established by the Government to examine the implications of removing private care from public hospitals.

In a related warning, the Health Insurance Authority (HIA), the regulator for the sector, said the plan to remove private healthcare from public hospitals – one of the key elements of Sláintecare – could result in a “structural decline” in the market and even threaten the viability of some private hospitals.

Under one projection, the HIA forecasts health insurance cover plummeting from 45 per cent of the population to 30 per cent over 15 years.

The HIA also said Sláintecare would require a substantial increase in current Government spending on healthcare, and that this would almost certainly lead to a rise in taxation.

“There is little doubt that additional spending of at least €1 billion per annum and probably considerably more than that would be required in the public hospital system to achieve the Sláintecare target waiting time of a maximum of 12 weeks for elective treatment in public hospitals,” the regulator said.

“In addition, the Government would have to fund the loss to public hospitals of private patient income of approximately €600 million per annum at current prices.”

Sláintecare is the 10-year programme to transform the health service into a single-tier system where patients are treated on the basis of need. Minister for Health Simon Harris is this week due to release details of his implementation plan for Sláintecare, which has been agreed on an all-party basis.

In its submission, VHI said its cheaper “non-advanced plans” had access to private treatment in public hospitals as their primary benefit. However, it said under the Sláintecare proposals to separate private healthcare from public hospitals, these products would no longer operate.

The State-owned VHI said the health insurance industry would seek to upgrade the 192,433 people covered by such schemes to private hospital plans.

“This would be a significant challenge as the cheapest private hospital plan could be about €300 higher. Undoubtedly a large number of non-advanced [plan] members will be unable to afford this price increase and will cancel their policies. These cancelling members will exclusively rely upon their public healthcare entitlements.”

In its submission to the expert group, the HIA said there were two alternative and reasonable scenarios for the health insurance market that could come to pass depending how Sláintecare was implemented.

The first was a “structural decline”which would see the percentage of the population with health insurance cover fall from about 45 per cent to 30 per cent over roughly 15 years.

It forecasted that this fall-off could take place if Sláintecare succeeded in reducing waiting times for elective care in public hospitals to the 12-week target within a short period of time. In such a scenario, it said, many people – particularly young adults – may not see the need to have health insurance.

On the other hand, it said, if waiting lists continued to be quite long due to insufficient Government investment, shortages of clinical staff and lack of capacity, the numbers with health insurance could remain within the 40-50 per cent range as at present.

The regulator suggested there could be regional variations and that people living away from Dublin, where most private hospitals were located, could question whether they should continue to pay for health insurance.

“There is a possibility that in the event of a successful Sláintecare introduction and an accompanying increased level of taxation that stabilisation [of the market] would take a while and would eventually occur with a relatively low proportion of the population with health insurance and relatively high premiums.

“If the total value of premiums in the changed health insurance market was much lower than today, it could possibly lead at least one of the current private sector insurers to leave the market.”