Tánaiste says CervicalCheck will be improved amid criticism from Vicky Phelan 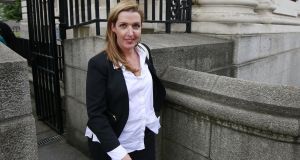 Vicky Phelan has criticised the Government for failing to take on board the more serious recommendations of the Scally report. File photograph: Nick Bradshaw/The Irish Times

Ms Phelan had hit out at a lack of Government action, saying that while the majority of recommendations from the Scally report into the CervicalCheck screening controversy have been taken on board, the more serious recommendations have not.

Those include the introduction of mandatory open disclosure.

Ms Phelan was one of a number of women whose smear tests were found to be falsely negative for cervical cancer in a 2014 review of smear tests taken under the CervicalCheck screening programme.

Writing in a Sunday newspaper, Ms Phelan appealed to Taoiseach Micheál Martin and Minister for Health Stephen Donnelly not to wait until she has died before making changes, but to “do the right thing and right the wrongs of the past”.

She called on the Government to set up a steering committee to oversee CervicalCheck, to make changes to the CervicalCheck tribunal and to help Labour leader Alan Kelly in introducing legislation to amend the Civil Liability Act.

The campaigner said she was angered that the State and the HSE had failed to apologise to Ruth Morrissey, a fellow CervicalCheck campaigner, before her death last Sunday.

Responding to Ms Phelan’s criticism, Mr Varadkar said on Sunday that the Government will put forward patient safety legislation in the Dáil.

“We have put aside funding to develop a cervical check lab here in Ireland so that we can build up capacity to do the tests in Ireland rather than overseas,” he added.

“I think one of the things that was achieved by Ruth Morrissey in the judgment that she got in the Supreme Court, is that it sets out a framework against which State claims agencies can settle cases and settle them quickly and they should do that.

“But we do need to bear in mind, there will be occasions where there’s a dispute about the facts, where some experts will say that a smear was misread or others will say it wasn’t actually and it wasn’t negligence.

“Where there is a dispute of the facts then you need some sort of hearing, and unfortunately that’s unavoidable and I wish I’d realised that a bit better two years ago.” – PA