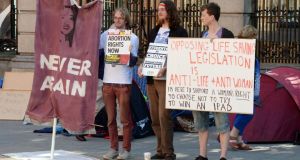 Pro- choice protesters outside the Dail during the debate on the abortion / Protection of Life Bill. Photograph: Alan Betson / THE IRISH TIMES

The trenchant criticism by the UN Human Rights Committee, which published its concluding observations yesterday, places yet another dark cloud over Ireland’s human rights record and echoes the experiences of women with unplanned pregnancies or whose pregnancies have become a crisis by virtue of being denied abortion services in their own country. The committee has extended these women a degree of respect and dignity – something the State has failed to provide – by affirming that Ireland’s abortion laws are in violation of human rights.

The committee described as “severe mental suffering” the denial of abortion services to women in Ireland and criticised the “discriminatory impact” of the State’s reliance on women travelling abroad to access necessary healthcare services, in particular for those women without the resources to travel.

The thousands of women who use the Irish Family Planning Association’s counselling and medical services each year, and the thousands more who travel to the UK and other countries for an abortion, do not speak the language of international human rights but what they say amounts to the same thing: it is long past time for the Government to make safe and legal abortion services available in Ireland.

Women who access our services do not use the committee’s language of “cruel, inhuman and degrading treatment”, but they tell us about such treatment every day. They do not talk about “discrimination”, but describe how they are abandoned by a State that stigmatises them, treats them as criminals and forces them to leave their country for health services denied to them.

During its formal review by the committee, the State attempted to justify its abdication of responsibility to women by pointing to the right to travel for abortion and to access information about abortion. When questioned by the experts on the discriminatory nature of these laws, whereby only those with resources can exercise their right to travel, the State replied that “we have no solution to that” and “we have not been challenged to make a change to legislation”.

Many women who use our services tell us that the legal, physical and financial obstacles of travelling for an abortion are insurmountable. These are women on low income or in poverty, women experiencing violence, women with disabilities, young women, women living in State care and asylum-seeking women. They cannot or will not speak publicly to claim their rights. Their voices are not heard.

In its observations, the committee highlighted how the “highly restrictive” Protection of Life During Pregnancy Act fell short of meeting international human rights standards. The experts were particularly concerned at the harsh criminal sanction of 14 years’ imprisonment hanging over women and their doctors and the “lack of procedural clarity” for doctors in determining a risk to a pregnant woman’s life. The State must now accept the committee’s recommendation to “swiftly adopt” guidelines clarifying what constitutes a substantial risk to the life of a pregnant woman.

The committee asserted that the excessive scrutiny women with mental health problems face in accessing life-saving care under the legislation caused “further mental distress”. The UN body also expressed concern at the “strict restrictions” health providers face in giving women information on abortion and called on the State to make information available through wider channels and ensure that providers are not subject to criminal sanctions.

During its review the State affirmed that the “will of the people” prevented it from addressing these violations and bringing its abortion laws into line with human rights. When challenged on how its abortion laws were out of touch with the views of its population, the State conceded that the public had never been given the opportunity to vote for less restrictive laws.

A, B and C v Ireland

The challenge for the State is now clear. It must adopt the committee’s recommendations and “revise its legislation on abortion, including its Constitution, to provide for additional exceptions in cases of rape, incest, serious risk to the health of the mother, or fatal foetal abnormality”.

1 One hundred Irish retailers for all your online Christmas shopping
2 School ordered to reopen after closing due to Covid-19 fears
3 Covid-19: Backlog forces HSE to skip calls to thousands of close contacts
4 Suzanne Lynch’s US Election Diary: Trump ‘walks out’ of TV interview at White House
5 'It’s his dishonesty, lack of character, his deceit' - ex-CIA chief excoriates Trump
Real news has value SUBSCRIBE