Children’s future prospects continue to depend on family circumstances 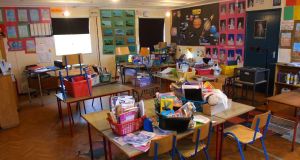 The ESRI study says social inequalities are apparent in the skills children bring with them on starting primary school. The attitudes, dispositions and language skills of five-year-olds differ according to social class, mother’s education and household income.

Children’s wellbeing in modern Ireland is largely shaped by the circumstances and social position of their parents, despite improvements in health and education, according to a major new study by the Economic and Social Research Institute.

The result is persisting inequalities, 100 years after the 1916 Proclamation resolved to “cherish all of the children of the nation equally”, the ESRI analysis states. The study brings together findings from the first 10 years of the Growing Up in Ireland research into Irish schoolchildren to provide what the institute describes as an authoritative description of how education, family and health in 21st Century Ireland influence children’s outcomes.

It says the findings point to public policy implications for supporting families most in need and helping children to reach their potential, regardless of family circumstances, health or ethnic background.

Ireland has made huge strides in how it thinks about and treats children, according to Prof James Williams of the ESRI. However, the evidence is that we have not lived up to the Proclamation’s resolution to cherish all children equally. “Despite the changing nature of inequality over time, children’s future prospects continue to be shaped by family circumstances. Measures existing to help children flourish must be cognisant of the powerful impact of the home environment on child wellbeing and development.”

The research shows a consistent pattern of disadvantage for children living in one-parent families, mostly for financial reasons. “Even accounting for differences in family characteristics such as income, maternal education, parent-child conflict and maternal depression, children in one-parent families are at a significant disadvantage in terms of their risk of experiencing socio-emotional and behavioural difficulties.”

Although mothers with a migrant background tend to be more highly educated than Irish mothers, especially those from western Europe and Asia, migrant children’s reading and math scores are lower. This is especially so for eastern European children, in the case of reading, and African children, for maths.

Language skills are more advanced in higher-income families, even at three years of age. Home-based learning activities, parental expectations, reading to young children and visits to the library are all much more common among children from more advantaged families.

The study says social inequalities are apparent in the skills children bring with them on starting primary school. The attitudes, dispositions and language skills of five-year-olds differ according to social class, mother’s education and household income.

However, far more significant in explaining the readiness for school are factors such as having a disability or special educational need, the child’s home environment and early language and cognitive development.

Generally, levels of childcare are higher among more advantaged families, apart from unpaid care provided by relatives, which is more common among poorer families.

The study welcomes the introduction of a free pre-school year as this has levelled access to this form of care. Health factors also play a role in inequality; low birth weight, obesity and low breastfeeding rates are most common among disadvantaged families.