‘So shocking’: RTÉ’s Claire Byrne on her positive coronavirus test 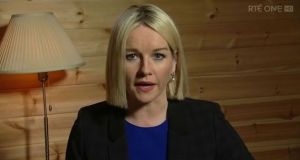 Claire Byrne presenting her show on RTÉ One last Monday while in isolation at home.

RTÉ presenter Claire Byrne has said she felt guilty, shocked and worried after being diagnosed with Covid-19.

Speaking about her experience while co-hosting her Claire Byrne Live show in self-isolation from her garden shed on Monday night, she told viewers she thought last week that she simply had a head cold and possible chest infection.

At no point did she have a temperature, which convinced her that she would not be positive for the coronavirus.

She went for a test at a Health Service Executive facility, where a nurse in full protective gear brought her inside, asked for her symptoms and where she had been recently, before taking a swab from her throat and nasal passage.

The broadcaster’s symptoms got “a little worse” over the following days, with her cough getting “more ingrained”. She developed aching limbs and “real fatigue”, she said.

The “worst moment” was over three successive nights when she had a “hacking cough” and began to notice she was becoming breathless.

“I was definitely getting to the point where I was struggling for breath,” she said.

On her test result proving positive, she said: “I can’t tell you what that’s like – it is so shocking.”

Byrne said she then “went into guilt mode, because I felt, ‘How many people have I given this to?’ That was my big concern.”

“I felt guilty, I felt shocked, and I felt worried,” she added.

Byrne made a list of all the people she had spoken to for more than 15 minutes within two metres of her since a few days before her symptoms showed.

In her case, the Army called to get these details as part of follow-up contact tracing, to inform those people and advise them of what to do.

Byrne said she thinks she is through the worst of the disease at this stage as the shortness of breath has passed.

“Many of us are going to go though that experience – that’s all part of it.”

RTÉ earlier released details of an email Byrne sent to staff in which she said she was “well now and through the peak of the condition”. She expressed her thanks to colleagues who supported her through since her diagnosis.

Separately, Tánaiste Simon Coveney said on Monday he had tested negative for the coronavirus. In a statement, Mr Coveney said: “Like thousands of people across the country, I was contacted in recent days by a member of the HSE contact tracing team to say I had been in close contact with a person who has tested positive for Covid-19.

“I followed all protocol and was tested. The result is negative for Covid-19.”

Mr Coveney did not specify who he was in close contact with, but he appeared on RTÉ’s Claire Byrne Live two weeks ago in studio with the broadcaster.

In her email to staff, Byrne said: ““I made the decision that I wanted you all to know this at the earliest opportunity. The HSE contact tracing system worked with me over the weekend.”

She said she was getting better and was working with Medmark and her own GP on when she could return fully to work. Byrne has been in self-isolation for over a week after experiencing cold-like symptoms associated with Covid-19.