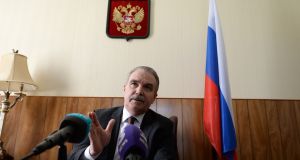 Russia’s ambassador to Ireland has defended the accuracy of the country’s low Covid-19 death rate saying there has been no attempt to manipulate it downwards.

Diplomat Yuriy Filatov said the reporting of deaths was “a complex procedure” and there was a legal obligation on doctors in Russia to report the exact cause of death which may not be coronavirus itself but an underlying health condition.

Moscow’s official mortality rate - the number of deaths relative to infections - has drawn scrutiny because it is relatively low to countries who are battling large outbreaks of the disease.

Speaking to Irish media on the eve of Russia’s national day, Mr Filatov said that it would be “mortally and absolutely unacceptable” to under-count Covid-19 deaths.

It would not be “practical” either because “we have to have a realistic picture of where we are and where we are going,” the diplomat told reporters on a video-link press conference.

Russia reported 8,779 new Covid-19 cases on Thursday, bringing its national total to 502,436 - the third highest in the world after Brazil and the US - but it has a relatively low official death toll of 6,532.

New figures from Moscow’s health department reveal a higher general mortality rate, showing a 58 per cent increase in deaths in May compared with average figures for 2017 to 2019.

The Russian capital - the worst-affected area of the country with a population of 12 million people - reported that 15,713 people died in the city last month, which is significantly higher than the 9,914 average death toll for the previous three years.

The difference amounts to an excess of 5,799 deaths. Officials have said that 92 per cent of these deaths could be attributed to coronavirus and 2,757 of deaths were primarily caused by Covid-19.

Russia’s ambassador in Dublin said that Moscow has run “an immense testing campaign” with more than 13 million people tested which has “made it easier to contain the virus at a very stage.”

More than 250,000 patients had recovered from the disease, he said.

Mr Filatov cited comments by Irishman Mike Ryan, the executive director of the World Health Organisation’s emergencies programme, on Wednesday that Russia’s low coronavirus death toll was difficult to understand and that the low mortality rate was “unusual”.

The ambassador rejected claims by the European Commission this week that Russia was running false and misleading online information about Covid-19 during the pandemic.

“For what purposes?” Mr Filatov asked when the commission’s allegations were put to him.

“We are fighting the same enemy,” he said.

He questioned the motives of European Commission vice president Vera Jourová who produced the report and said that Brussels had not provided any evidence to support their claims.