Public childcare would be good for parents and children, Dáil research finds 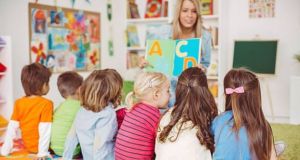 Ireland’s childcare sector is characterised by some of the highest fees for parents in Europe, as well as low wages and below-average levels of State investment. File photograph: iStockPhoto

The introduction of universal, public childcare could improve affordability, accessibility and quality in the sector, according to analysis produced by the Oireachtas research unit.

Such a development would be a “dramatic policy shift for Ireland”, given the dominance of private childcare institutions in the State, it says.

The desktop report was produced by the Oireachtas Library & Research service, which is charged with producing impartial briefings on policy issues for the Oireachtas. It is based on an analysis of available evidence, including from schemes elsewhere in Europe.

It finds that while the evidence base is not extensive, “the available research has identified positive outcomes of public ECEC [Early Childhood Education and Care] programmes for parents and children”.

In Germany, for example, it was associated with a reduction in child abuse and neglect, an increase in childbirth rates, improvements in children’s social and emotional development and an increase in maternal life satisfaction.

The document finds that the evidence suggests the introduction of a universal, public childcare system in Ireland “may boost affordability, accessibility and quality of childcare services and enhance maternal and child wellbeing”.

The document does not examine the financial implications of such a policy, but identifies “key challenges” to universal provision as “the market-driven approach to [childcare] provision and the negative economic impact of the Covid-19 outbreak”.

Parents: Are you worried about childcare post-Covid?

Ireland’s childcare sector is characterised by some of the highest fees for parents in Europe, as well as low wages and below-average levels of State investment.

Meanwhile, the Dáil committee on Covid-19 will on Tuesday hear of the impact of the pandemic on the childcare sector. Industry group Early Childhood Ireland (ECI) will call on the Government to “ramp up” investment in the National Childcare Scheme, saying that the answer to the crisis is “not direct payments to parents or tax-breaks to offset costs”. It will also call for the ring-fencing of funding used during the pandemic to support wages.

Teresa Heeney, the ECI chief executive, will tell the committee that “central government needs urgently to engage with the sector and develop a plan on how funding needs will be met”.

In a written submission, Seas Suas, a representative group for independent childcare providers, says “the response to this childcare crisis continues to be short-sighted, confusing and lacking in detail”.

Siptu official Paul Bell will say the failure to set up a childcare scheme for essential workers “was a major setback to healthcare workers who were desperate for some relief and support”.

The secretary general of the Department of Children is also expected to tell the committee the sector is in “uncharted waters”. Fergal Lynch will say that estimating demand for childcare between June 29th and early September is a “significant challenge”.

“Overall we anticipate that demand for places will rise progressively over the summer and autumn but we are in uncharted waters this year, and we cannot be definitive about uptake.”

This will bring “challenges” to the sector’s funding model.

Meanwhile DCU Professor of Early Childhood Education Mathias Urban, who leads the university’s centre for early childhood research, said the current model of childcare provision “has led to a fragmented system which is very expensive and doesn’t produce good results for children, families or the State.”

“The question is how we move towards a public conversation about what we as a society see as the purpose of investment in early childhood education,” he said.

A spokesman for the Department of Children said the government is working to develop a new funding model, and has appointed an independently chaired expert group to oversee the work. “This group is tasked with examining the current model of funding, its effectiveness in delivering quality, affordable, sustainable and inclusive services and considering how additional resourcing can be delivered for the sector to achieve these objectives, drawing on international practice in this area,” the spokesman said. The project is set to run to 2021.

There were an additional two deaths from coronavirus in the State documented on Monday, bringing the death toll to 1,717, according to the latest figures from the Department of Health. Four more people were confirmed as having caught Covid-19, bringing the total number of known cases of the disease in the State to 25,383. This is the lowest daily figure of new confirmed cases since March 9th when the pandemic was in its early stages in this country.

Chief medical officer Dr Tony Holohan noted that more than one-third of new cases in the past 14 days had been in people under the age of 35.