Prof Aidan Halligan dies at the age of 57 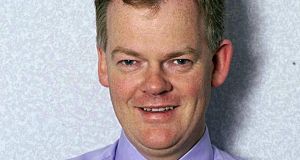 Prof Aidan Halligan, the UK-based Irish doctor who turned down the chance to become the first head of the Health Service Executive (HSE) more than a decade ago, has died aged 57.

Prof Halligan, who held a series of senior posts in the British National Health Service (NHS), died suddenly at his home in England.

Chosen by the Government to become the chief executive of the HSE on its establishment in 2004, he walked away from the job at the last moment, citing family reasons.

Most recently, he was director of Well North, a Public Health England initiative to improve the health of the underprivileged across the north of England.

From Dublin, he attended Templeogue College before studying medicine in Trinity College Dublin. After graduating in 1984, he completed postgraduate training in obstetrics and gynaecology at the Rotunda Hospital in Dublin and the Leicester Royal Infirmary.

In 2008, four years after turning down the HSE job, he described the Irish health service as “overmanaged and under-led” and criticised the constant use of outside consultants and experts to draw up reports on what should be done with the system.