Mark Molloy, father of baby who died in Portlaoise hospital, steps down after six months 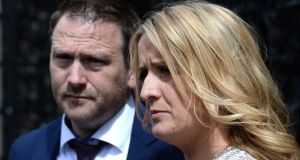 Patient advocate Mark Molloy, pictured with his wife Roisin, said he feels ‘let down’ by Minister for Health Simon Harris and Taoiseach Leo Varadkar over the under-funding of the national maternity strategy. Photograph: Cyril Byrne

One of two patient advocates on the board of the Health Service Executive (HSE) has resigned after only six months in protest at the “tokenistic” treatment of patients in the health service.

Mark Molloy also said he feels “let down” by Taoiseach Leo Varadkar and Minister for Health Simon Harris over the under-funding of the national maternity strategy.

Mr Molloy, who stepped down earlier this month, told The Irish Times he felt he could no longer be part of board decisions that were serving to erode the integrity of the work he and his wife Róisín Molloy were doing on behalf of patients.

The Molloys’ son, also Mark, was one of a number of babies who died unnecessarily as a result of failings at Portlaoise hospital, and they have campaigned since for greater accountability and patient representation in the health service. At the weekend, they marked what would have been Mark’s eighth birthday.

Asked what board decisions he was referring to, Mr Molloy referenced the HSE service plan, published last month.

He said he was unable to sign off on the plan as it was providing only a fraction of the funding originally promised for the national maternity strategy. “Medical negligence claims are going through the roof, and most of them are obstetric. And yet the plan could only fund a fraction – 12 per cent – of the €8 million a year that was promised for the strategy.”

The plan, which aimed to develop quality, safe, consistent and well-resourced care in the State’s 19 maternity units, was developed in response to official recommendations following the death of Savita Halappanavar in a Galway hospital in 2012. Many of its 77 recommendations have yet to be fully implemented.

Launched by Mr Varadkar when he was minister for health in 2016, the 10-year maternity strategy was originally provided with ringfenced funding but most of this money was diverted last year to pay for the new abortion service.

Mr Molloy said he felt let down that the ringfenced funding originally promised by Mr Varadkar had been removed. “We should not have to go cap in hand when this money was promised. In my line of work, ringfenced means the money is done and dusted,” said Mr Molloy, a quantity surveyor.

Mr Harris and HSE chairman Ciarán Devane both tried to persuade Mr Molloy to stay on the board, but he held to his decision to resign.

Mrs Molloy said the representation of patients in the health service was still marked by “tokenism”. “Patients are being brought in, and that’s good, but they are not being listened to,” she said.

Patient advocates were included in the HSE board last year on foot of a recommendation by Dr Gabriel Scally, the Northern Ireland public health doctor who investigated the CervicalCheck controversy.

A second patient representative, Dr Sarah McLoughlin, remains on the board.