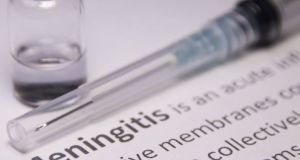 A specialist in public health medicine is urging parents to check the vaccination records of their children after three people died from meningitis in the past three weeks.

Dr Suzanne Cotter of the HSE’s Health Protection Surveillance Centre (HSPC) told RTÉ’s Morning Ireland some parents think their children are fully vaccinated when they might have missed the 13th-month visit.

She also said there had been a fall-off in meningitis vaccinations compared to other vaccinations for babies and young children.

On Wednesday the HSE appealed to the public to be vigilant for the symptoms of meningitis after 11 cases of meningococcal meningitis were notified to the HPSC since the last week in December. Three of those patients died due to the infection.

Provisional data indicates that different strains are circulating and causing disease, with two separate strains having been identified since the last week in December. All age groups have been affected.

The HPSC said it had established that none of the patients with meningococcal disease had contact or links with each other. The spread of meningococcal meningitis from person to person is very unusual, especially outside of close household contact.

There were five cases of meningococcal meningitis reported in the same time period last year. In 2018 a total of 89 meningococcal cases were reported, compared with 76 in 2017.

Meningitis is a serious illness involving inflammation of the membranes covering the brain and spinal cord. It can be caused by a variety of different germs, mainly bacteria and viruses.

Noting meningitis has symptoms similar to flu, Dr Cotter urged people not to disregard the symptoms, which include fever, vomiting and severe abdominal cramps. She also pointed out there could be a pin-prick rash or a bruise-like rash that could herald a very rare version of the infection.

Dr Cotter said an increase in the number of meningitis cases frequently occurs in winter months, sometimes following the flu season or accompanying flu season as flu can decrease the immune system.

People who have meningitis often do not know that they have it or that they have passed it on, she said, adding although the condition is relatively rare, it is a matter of concern there has been an increase recently.

“Parents should research their children’s medical records and make sure they have all their vaccines. Meningitis can be very dangerous - it moves quickly and develops rapidly,” she said.

“Time is critically important. If the classic symptoms are there, move quickly.”

Dr Cotter warned the rash can sometimes be fleeting at the beginning of the symptoms and that they can mimic other illnesses.

If anyone is suffering symptoms such as fever, vomiting, severe abdominal cramps they should seek medical attention, she said.

Immunity to Covid-19 could be lost in months, study suggests

Immunity to Covid-19 could be lost in months, study suggests 15:12
Attempted gun attack on man in his 20s in Co Derry village 14:44
Twelfth at Home begins with service at Belfast City Hall cenotaph 14:25
Number receiving coronavirus unemployment payment falls by 67,000 13:52
Father and daughter missing for 10 days found safe and well 13:34

1 Quarantine process to be tightened as health officials grow nervous
2 White House turns its fire on Anthony Fauci over Covid-19 comments
3 Dirty money: How the Mafia plundered Italy’s public health system
4 US passengers fly into Dublin: ‘I’m here for six days. I guess I’ll have to stay inside’
5 Maureen Dowd: Biden has his limitations but he’s no Trump
Real news has value SUBSCRIBE