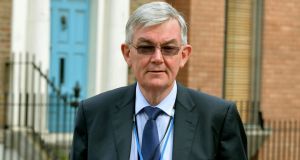 Department of Health secretary general Ambrose McLoughlin has said the current generation of parents could be the first to “bury our children” unless the problem of obesity is tackled. Photo: David Sleator/The Irish Times.

The obesity problem among young people is so bad that the present generation of parents may be the “first to bury our children”, Department of Health secretary-general Ambrose McLoughlin has said.

He told an Irish Heart Foundation conference today that the State had to move away from treatment and towards prevention, adding that tackling obesity was now a “public health priority”.

“If we don’t deal with [obesity], we will be the first generation to bury our children,” he said.

Mr McLoughlin addressed the conference on the feasibility of imposing a 20 per cent tax on all sugary drinks. One of the ways to tackle obesity, he said, was to restrict availability to so-called “top shelf” items such as sweets, chocolates and fizzy drinks which were not necessary for human health.

Mr McLoughlin said discussions were taking place with eight Government departments and an action plan on a “Healthy Ireland” would soon be submitted to the Minister for Health James Reilly.

He added there was now “significant evidence” that fizzy drinks contributed to childhood obesity. “We believe there is a need for a societal debate now to look at the issues.”

A poll carried out by the Irish Heart Foundation found that 52 per cent of the Irish public want a 20 per cent tax on sugary drinks such as full-fat Coca Cola and 7up, with some 87 per cent of the population believing such drinks contribute to obesity among children and young people.

In their last pre-budget submission, the Irish Heart Foundation advocated a tax on sugary drinks which it said would raise €60 million. The proceeds could be used to subsidise buying fruit and vegetables and support a children’s health fund in schools, it said.

IHF chief executive Barry Dempsey described the introduction of such a tax as a “no brainer to protect our children”.

Guest speaker Dr Adam Briggs from the University of Oxford said a 10 per cent tax on sugar sweetened beverages could lead to a 1.3 per cent reduction in obesity and reduce the number of obese and overweight adults by 14,000.

Consultant endocrinologist Prof Donal O’Shea warned that the health service was close to becoming “overwhelmed” by the number of obese children presenting.

Some 20 per cent of calories for Irish children between the age of five and 12 came from junk food, he said. He said children receive the equivalent of two weeks energy a year, or some 24,000 calories, from sugar-sweetened drinks.

Dr O’Shea said there had been an absolute explosion in the extreme end of obesity with a 1,200 per cent increase in those with a body mass index of 52 or over (18 to 25 is normal).

He criticised Coca Cola’s advertising campaign of personalised bottles with names on them which is aimed at children, describing it as “personalised pedalling to our kids”.