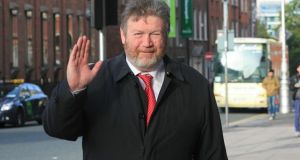 Minister for Health James Reilly is expected to seek Cabinet approval shortly for two urgent care centres in Dublin that will deal with less serious cases and ensure the new hospital is not overburdened with minor cases. Photograph: Gareth Chaney/Collins

The new national children’s hospital in Dublin risks becoming a “magnet” for less serious cases unless the same standards of care are available in the rest of the country, a conference has heard.

Eilish Hardiman, chief executive of the Children’s Hospital Group (CHG), said the risks of creating a “magnet hospital” needed to be addressed as it was not sustainable to have children coming to it to get treatment that could be delivered in their local area.

“When you put on the new lights, everyone is attracted to them but this is not sustainable and it isn’t right,” she said.

Minister for Health James Reilly has said the new hospital, to be built at St James’s Hospital, will be ready by 2018.

Urgent care centres
Dr Reilly is expected to seek Cabinet approval shortly for two urgent care centres in Dublin that will deal with less serious cases and ensure the new hospital is not overburdened with minor cases.

“We have an obligation to educate society that you’ll still have healthy outcomes but you don’t need to come to hospital and you might go to your GP or rapid access unit locally,” Ms Hardiman told a symposium on the future of paediatric healthcare organised by Temple Street hospital yesterday.

She said standards of care need to be the same across the system and greater use of ICT made so that information flowed freely across a common children’s healthcare system.

Mary O’Connor, chief executive of Children in Hospital Ireland, said paediatric units were the poor relation in the hospital system, and qualified nurses in the units were being drawn away to plug gaps in other areas. Unless this problem was addressed, the new facility would become a magnet hospital for all kinds of cases.

Dr Michael Capra, a paediatric oncologist at Our Lady’s hospital Crumlin, said parents’ perception was often that everything was “bigger and better” in a tertiary care hospital. “Sometimes they’re right; most times they’re not,” he said.

He stressed the importance of regional services retaining ownership of their patients and said it was vital that children got the same, or very similar, treatment both locally and in the new children’s hospital.

Dr Ciara Martin, a paediatric emergency consultant at Tallaght hospital, pointed out that children were healthier, better off and enjoyed better immunisation today yet more and more were attending acute hospitals. Parents wanted paediatric treatment for their children and if this wasn’t delivered the service would be overrun.

Ms Hardiman told the conference she wanted to see the new hospital tri-located with a new maternity hospital as well as the existing adult hospital at St James’s. As chief executive of CHG she has responsibility for overseeing transfer of the three existing children’s hospitals.

1 Republic’s Coronavirus death toll rises by 28 as confirmed cases up by 500
2 Doctors sent to help at Cavan hospital after up to 70 staff infected with coronavirus
3 ‘When I look at the viral loads we find in elderly people, it is mind boggling’
4 Threatening posters in Co Clare tell holiday home owners to ‘f**k off’
5 This time, the future of the euro really is at stake
Real news has value SUBSCRIBE