We asked three mini-marathoners about their preparations, hopes, tips - and embarrassing running stories 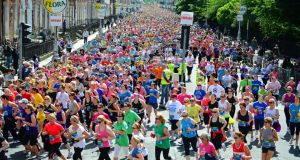 Participants in the Flora Women’s Mini Marathon making their was from Fitzwilliam square, at the start of the 10k run last year. Photograph: Eric Luke 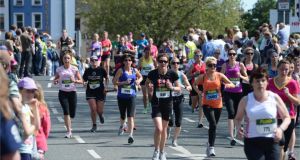 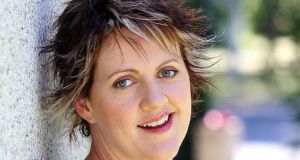 
Are you running for charity, and why?
I am running for the Irish Dogs for the Disabled. I am involved in a fundraising/awareness trip to the US later this year, which is being filmed for a television documentary. They provide amazing assistance dogs to children and adults with physical needs. I was inspired and wanted to raise money for this great charity.


Is it your first mini-marathon?
I’ve been doing it for at least eight years.


Why did you do it?
I get involved through 2fm every year to encourage women to get involved and I have enjoyed getting the women going by doing the warm-up at the start line with the 40,000 participants, which is the most fun anyone could ever have.


Will you run alone or with others?
I’ll be commentating at the start line so won’t really start until half the women have gone past. By then it’s everyone for herself. I’ll jump in on my own and trundle along.


How much training do you do each week?
I’ve only been able to walk this year in training due to a back injury. I aim for four miles three to four times a week.
Any races so far, and how have you done?
None. I’m always in the radio station at weekends when the races are on (great excuse).


Your ambition for the mini-marathon?
To have fun, do some fundraising and get over the finish line in one piece.


Any embarrassing running moments?
Just before the race two years ago I was warming up the crowd playing songs. S Club 7 went a bit OTT and I jumped up and nutted myself on the roof of the little platform I was on. I think the first 50 rows heard the clunk.


Best advice you’ve been given so far?
Don’t look for the finish line. Just keep going until you’ve gone over it.


Will you keep running afterwards?
I’ll certainly stay fit all summer. Who knows, the running may follow.


Are you running for charity, and why?
Yes, there is a real motivational aspect to running a race for a cause other than just running a race. So I decided to run for Breast Cancer Ireland as it is a fantastic cause and it does great work in researching a cure for a disease that has affected so many.


Is it your first mini-marathon?
Yes, this will be my debut for the Flora Women’s Mini-Marathon.


Why did you do it?
It will be another tick off my to-do list. I’ve heard it’s a fantastic race to take part in with a great buzz with 40,000 women taking part – it’s the largest all-women event in the world, I believe.


Will you run alone or with others?
There is a minibus with 20 of us (known as the Dulick Pink Team) travelling to Dublin for the event.


How much training do you do each week?
I train four times a week, anything from four to six miles , and it can vary from a slow jog to a fast trot depending on the form or if I have a race coming up.
Any races so far and how have you done?
Yes, I have a half-marathon, a couple of 10-milers and more than 20 10ks and a number of smaller races to my name.

On paper I look like a real pro but far from it – I find races are great to keep me in training but no matter how many I do they still don’t get any easier. Most I enjoy doing, some are tough and not so enjoyable but at the end of each race I never regret doing it and a few days after I’m planning my next run.


Your ambition for the mini-marathon?
I would love to run in under 53 minutes; 52.59 minutes would do me.


Any embarrassing running moments?
Yes, I had a “run in” with a cat’s eye one mile into a 10-mile training run where I came out the worst with skinned knees and hands and a seriously bruised ego. After a little self-pity I carried on and ran the remaining nine miles surprisingly fast.


Best advice you’ve been given so far?
In running a race, run with your legs to be fast, with your mind to be faster and your heart to be unstoppable . . . so it is not all about the legs after all.


Will you keep running afterwards?
Most definitely. I have a great bunch of running friends to run with, though I won’t be breaking any world records. I have the bug – I’m an addicted runner.

, participating with an oxygen cylinder due to cystic fibrosis


Why are you doing the mini-marathon?
I have cystic fibrosis and had a very bad period in hospital late last year, from October to December. I was particularly sick with pneumonia and got a little scare. As a result, I ended up needing oxygen.

With a sudden drop in lung function it made me realise I need to do everything I can to maintain my current lung function and stay well.

The mini-marathon was a way to motivate myself to get out there every day and do the best I can to stay well. Walking exercise is a big part of physiotherapy treatment for CF. It also gives me an opportunity to raise funds for CF.


What particular challenge will you face?
The distance is something I haven’t covered before and to do it needing oxygen will obviously bring its own challenges.


Are you taking part alone or as part of a group?
When I decided to take this on, my biggest concern was the oxygen cylinder that I need to carry and I didn’t think I would make the 10k carrying it on my back so I decided to try to get as many girlfriends as I could to join in and make an occasion of it, and also they could walk with me and help carry the cylinder. SAnne-Marie Dunne, Barbara Fynes, Rebecca Sherry, Karen Butler and Maeve Mullins are all fantastic girls who I am deeply grateful to.


Your ambition for the race?
Finish it.


How have you been preparing for the race?
I am up to about 6k at the moment but have had a little setback the past few weeks health wise. I am off to Spain Friday week so I plan to do plenty of walking and the heat will be a fabulous break for me from the past eight months of Irish weather.


Best advice you’ve been given?
“One day at a time.” The hubby.