Luas has released footage from on-board CCTV cameras of collisions and near-misses between Luas trams and road vehicles, to show the dangers of running red lights at Luas junctions. Video: Luas 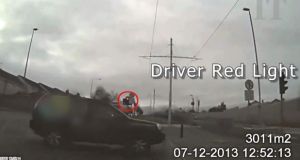 A screen grab from an on-board camera shows a motorist breaking a red light in front of a Luas tram.

There were 38 collisions between motorists and trams recorded last year - up from 24 on 2012.

Luas operators Transdev, the Railway Procurement Agency and the Garda are concerned this year’s figures may set a new record.

Describing the actions of some motorists as “dangerous”, “ irresponsible” and “stupid”, Mr Varadkar said he wanted drivers to be aware the Garda had cameras on traffic lights where roads cross Luas lines. He warned that under a new pilot programme using CCTV as evidence, motorists “can be prosecuted, and will be prosecuted for breaking a red light”.

Tram driver Eddie Byrne (53) from Ballinteer Co Dublin, who drove former transport minister the late Séamus Brennan from Sandyford on the fist public run of the Luas Green Line, was on hand this morning to assist Mr Varadkar in launching the safety campaign. “I have been hit by a car while driving a tram and it is terrifying,” he said.

A spokesman for the Garda said targeted patrols would be put in place in high-risk areas including Blackhall Place and Queen Street in the north inner city, and Belgard Road in south west Dublin to detect errant drivers.

Rory O’Connor acting managing director of the Railway Procurement Agency said Luas remained an extremely safe system but numbers of incidents was increasing with the major contributory factor being motorists breaking red lights. The agency revealed that since start up ten years ago there have been almost 282 million Luas passenger journeys, with 278 road vehicle / tram crashes.

The main areas where crashes have happened on the Green Line are at St Stephen’s Green, Harcourt Street, Cuffe Street and Dunville Avenue / Beechwood Road.

In a bid to increase awareness, Transdev yesterday placed a number of in-tram video recordings online to show motorists the folly of breaking a red light.

Watch the videos on irishtimes.com