Kicking your heels over the forefront strike 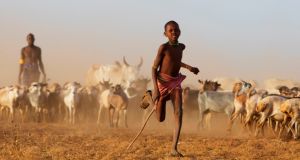 So, you’ve read Born to Run. You’ve worked months to adjust your running style to a forefoot strike.

Maybe you’ve even bought the minimal shoes. You’ve definitely told anyone who will listen about your Zen-like transformation into an associate member of the famed Mexican Tarahumara tribe.

And then someone comes along with research to say it makes no difference at all.

A new study has looked at the running style of a Kenyan tribe with no tradition of wearing shoes – the Daasanach – and found that they are more likely to strike the ground with their heel.

For the research, printed in online journal PLOS One, 38 members of the tribe, split evenly between men and women, were asked to run over pressure plates at a variety of speeds.

The results showed that most preferred running on the rear of their foot.

“I guess what we found really interesting about this is it directly shows that there is not one way to run barefoot,” the anthropologist behind the study, Kevin Hatala, told the Washington Post.

“We have a lot more to learn about how people who are barefoot run and what might be the best way to run barefoot.”

“This contradicts the hypothesis that a forefoot strike characterises the ‘typical’ running gait of habitually barefoot people,” said Hatala.

It goes against a 2010 study of the Kalenjin tribe in Kenya, which has been key evidence in favour of forefoot running.

That Harvard study has been influential because the Kalenjin tribe has produced some of the world’s greatest distance runners, and their strength was apparently based on a preference for forefoot running.

The Daasanach tribe has no tradition of distance running.

The difference is key because of a growing concern that the number of injuries among modern runners was being caused by a combination of heel-striking and the increasingly padded soles in the shoes they were wearing.

Since the trend for forefoot running developed, the minimal shoe has become a multi-million dollar industry globally, with sales in the US alone jumping 300 per cent between 2010 and 2012.