Many questions go unanswered due to time limits, but politicians on best behaviour 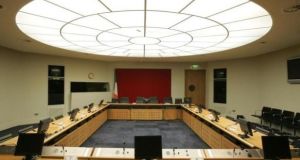 The National Public Health Emergency Team’s scheduled meeting for Tuesday had to be cancelled because of the committee hearing. File photograph: The Irish Times

TDs’ first attempt to scrutinise Ireland’s response to Covid-19 by questioning the main officials involved was a rushed, uneven affair, even given the exigencies of social distancing during a pandemic.

Although many questions went unanswered due to strict time limits on speakers imposed by a scrupulously fair chairman Michael McNamara, there was a collective sense that at last some political accountability was finally being injected into this emergency.

For the most part, politicians were on their best behaviour. Although Fianna Fáil’s John McGuinness, who has something of a record for abrasiveness at Oireachtas committees, managed to accuse Department of Health boss Jim Breslin of being “flippant” concerning one of his answers.

Both men, well used to fielding media questions at various briefings over the past two months, coped comfortably with the scrutiny and managed to answer questions at the special committee without giving any hostages to fortune.

Fine Gael TD Fergus O’Dowd best summed up the wider concern over the way Covid-19 has ripped through nursing homes by listing shortcomings of the sector even before the pandemic started.

A running theme was the lack of information available to TDs. The Social Democrats’ Róisín Shortall wanted “open source information” about the modelling done to underpin decisions. Denmark, she pointed out, published the risk assessment around opening of its schools. Could we not do the same for big decisions such as allowing construction to begin again?

Richard Boyd Barrett said he has been looking for the minutes of the expert advisory groups “for two months” without success.

Dr Holohan said they would be published soon. Separately, the latest minutes from the National Public Health Emergency Team (NPHET) meetings materialised online while the Dáil committee was meeting.

Mr McNamara wanted officials to publish the criteria on which they base decisions for moving from one phase to another, while other TDs sought the background assumptions on which our modelling data are based.

Answering questions on outbreaks in long-term residential settings, Mr Breslin insisted Ireland’s figures on cases and death were “much more accurate and representative” than those of other countries to which we are often (unfavourably) compared.

Much later in the second session, though, Fine Gael’s Jennifer Carroll McNeill said the data from Ireland in the latest European Centre for Disease Control bulletin, on these settings, goes back to mid-April, when other countries’ figures were up to date.

Both Dr Holohan and Mr Breslin were chary about international comparisons, though Mr Breslin did assert that Ireland is “toward the top of the testing league”.

‘Closer to the epicentre’

They were specially sniffy about comparisons with New Zealand, widely feted as best in class for combatting the virus, or Sweden, beloved of libertarians for its relatively lax approach to the crisis.

New Zealand is “on the other side of the world” and not in an economic and social union as Ireland is, Dr Holohan told the room.

“We were much closer to the epicentre” of the outbreak in Europe – China, the original epicentre and nearer to New Zealand, went unmentioned.

Sweden, meanwhile, has four times the number of patients in intensive care, he added.

All the same, he did refer again to New Zealand later when he asserted that Ireland had been the “quickest country in the world” to impose visitor restrictions in care homes following a first case of the disease.

NPHET’s scheduled meeting for Tuesday had to be cancelled because of the committee hearing; it may not be the last to suffer this fate as TDs find their stride in future hearings.