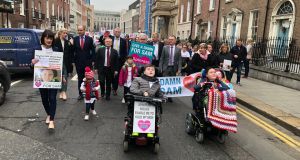 Opposition politicians joined families of children with spinal muscular atrophy who are seeking access to a new drug, Spinraza, in a march to Leinster House on Thursday. Photograph: Paul Cullen

Families of children with a rare muscle-wasting disease have protested outside the Dáil calling for the HSE to approve an expensive new treatment that could save their lives.

Several hundred families and their supporters, including children with spinal muscular atrophy (SMA) on their motorised scooters, travelled up Molesworth Street to the gates of Leinster House in support of their campaign.

SMA is a rare genetic condition that makes the muscles weaker and causes problems with movement.

Fianna Fáil leader Micheál Martin, Labour leader Brendan Howlin and other Opposition TDs took part in the march which followed a decision last week by the HSE leadership team not to reimburse the drug Spinraza after an agreement with manufacturers Biogen on a viable price was not reached.

These figures are disputed by patient group SMA Ireland, which claims the annual cost of providing the drug could be as low as €3 million. About 40 Irish children with the degenerative condition would benefit from access to Spinraza, also known as nusinersen.

Sinn Féin TD, Caoimhghín Ó Caoláin, who hosted a presentation by families affected by the disease at the Dáil on Thursday, questioned how serious the HSE was about reaching a deal to supply the drug.

The cost of the drug would be lower if it were considered for all patients and not just children, while Biogen would be open to different ways of covering the cost, including deferred payment, he suggested.

Stephen Lannen, whose daughter Nellie has SMA and is accessing Spinraza under a compassionate access programme, said the drug had resulted in a huge improvement in her quality of life. She can now sit up with some aid, can move her arms and is attending school three days a week. Her initial life expectancy was two, but she is about to celebrate her fourth birthday.

Mr Lannon said that unless there is wider access to Spinraza, children would inevitably and unnecessarily die.

“No price can be put on what this drug has done for Nell,” he said, while going on to accuse the HSE of “cynically manipulating” the cost and effectiveness data on the drug.

Speaking in the Dáil on Thursday, Fianna Fáil deputy leader Dara Calleary said the HSE’s estimates on the cost of the drug were out by up to 50 per cent.

Mr Ó Caoláin said Ireland was one of only three EU countries refusing to authorise the drug, along with the UK and Estonia.

The two TDs accused the HSE of misleading the Government on the cost of drugs when 25 other countries had already approved it for use and considered the pricing reasonable.

Tánaiste Simon Coveney said the door was open to resuming talks on pricing. He called on TDs not to treat the HSE as a “cold body” that did not want to grant funding for the drug, because everyone wanted the drug to be approved.

Mr O Caoláin said that if the Tánaiste could see the distressed parents and children protesting outside Leinster House to appeal for the drug to be funded it would be his “first priority”.

Mr Coveney replied that it was his priority but the obligation to help patients in distress had to be balanced with protecting funding for drugs for as many people as possible in the health services.