Half the battle is getting outside the door 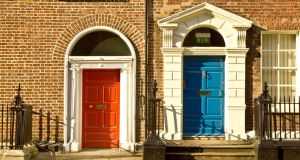 GET YOUR KIT ON: RUNNING: In the first of a fortnightly series aimed at helping people to take up a new sport or activity, EMMET MALONEprofiles the increasingly popular pursuit of running

FINE WEATHER and the recent turnout of 10,000 people for the Spar Great Irish Run in the Phoenix Park have marked the start of the annual summer running season in Ireland. Thousands of people up and down the country are out now in earnest trying to improve their fitness in the open air.

Many others will worry and prevaricate about taking up running. For some, “half the battle is just getting outside the door,” says Dr Giles Warrington of Dublin City University, a physiologist, a runner himself and specialist in the area of exercise.

“If you manage to adhere to a simple routine for four to five weeks, then you’re far more likely to stick with it over the longer term.

“Create a contract,” he suggests, “make a pact with friends that creates a bit of peer pressure and set out some realistic goals”.

“Park the car a little bit short of work and run the rest of the way if they have showers there, get out with friends during lunchtime and work towards something.

“Sometimes it’s hard to make the time for training. If you have a race coming up then it helps to provide your motivation, it doesn’t really matter whether it’s a marathon or a short fun run.”

Emily Dowling, a former international athlete who helps coach many first timers each week at the Sportsworld running club based in Dublin’s Bushy Park, cautions against aiming too high – or too far.

“For a lot of women coming out around now, the mini-marathon is the aim and I think that’s perfect, it’s 10kms which is very manageable for most people.

“We get new people nearly every night at the moment and my own view is that if you’re just starting out, then a marathon is too much the first year. You need to let your body get used to the training, but almost everyone should be able to manage 10kms after a while and the half-marathon is a great target slightly further down the road for a lot of people.”

For some, the target will be a qualifying time that provides a stepping stone for one of the very biggest international races. For most, the target is simply getting around. The reward: a happier, healthier you.

‘I never cease to be amazed by the ways that running benefits people,” says Emily Dowling, winner of the 1981 Dublin City marathon and coach to people of virtually all abilities.

“Aside from just improving their fitness, they arrive along suffering from depression and all sort of other problems but make friends, form groups within groups and end up helping each other in all sort of ways. I’ve seen people finish with medication and change their lives.”

Dowling herself battled a form of cancer – non-Hodgkin’s lymphoma – back in 2005 and firmly believes that her fitness played a key part in helping her through.

“I went through a lot of treatment,” she recalls, “but I could still jog and I was never physically sick as a result of the treatments. I’ve no doubt that that was down to my fitness, it helped an awful lot.”

‘I think it’s great for people,” says Dr Giles Warrington. “Running is one of the most efficient ways of expending energy – broadly speaking, you’ll burn about a hundred calories for every mile you do – and that’s great for weight regulation.

“There are significant cardiovascular benefits but all sorts of other things too. It helps improve bone density and so can help prevent osteoporosis. There are lots of physical benefits, in fact, but it can improve mental health, too, and most runners will certainly benefit from the endorphin release they experience during the exercise.

Personally, I find that it declutters my head, too – I run in the morning and map out my day while I am doing it.”

Warrington believes running is a great way to get back into exercise if you haven’t been doing any, but recommends that if it has been a long time since you’re done anything strenuous or if you are carrying a bit too much weight, that you consult your GP just to be on the safe side.

“The reality is that the benefits far outweigh the risks, but you do need to be sensible about it. Start slowly and work your way up.

“The ideal is probably to be doing something approaching 150 minutes of exercise a week which might typically work out at 30 minutes a day for five days a week but don’t be afraid to break that down into three 10-minute segments.

“Walking can be a great starting point or maybe running for one minute and then walking for a few. The important thing is to know your limits and look to improve them over a period of time.

Also, if you’re a little on the heavy side then it’s best to wear the proper shoes so as to prevent any injuries.”

Not a lot really. If you’re going to get serious about it, you should invest in a proper pair of running shoes – if it’s never been an issue before, visiting a retailer equipped to assess your gait is a good idea.

Ideally, tops, shorts and socks that “wick” moisture away from the skin and therefore help to keep you cool would be good too, but a key advantage of running is that as long as you’re not completely unused to exercise, you can pretty much walk outside your front door in whatever feels comfortable and give it a go.

Most people will also choose to horrify purists by listening to music or the radio while running and the most popular choice tends to be something like an iPod nano which will set you back about €130.

After that it’s very much up to you. There are electronic coaching devices – a Nike attachment for your iPod costs about €30 (using one with other makes of shoe is a little awkward), while the new Adidas miCoach, which works with any MP3 player, comes in at something closer to €140.

“Running computers” (very fancy stopwatches) can cost much more, but the number of apps for smart phones, some of them free, seems to grow almost by the day.

Joining a club should cost comfortably less than €100, and many cost a fraction of that, while race entry fees – should you decide to enter any – range from a tenner to maybe 20 times that plus travel and accommodation for something like the New York marathon, should you feel inclined.

Pretty much all around you.

This weekend’s Great Limerick Run is just one of countless races around Ireland during the months ahead, many of them in great settings for a weekend away.

Many people target the Dublin City Marathon each year (dublinmarathon.ie) but a more modest goal might be to participate in each of the three Phoenix Park build-up races, culminating in the half-marathon in September.

Details of clubs are available via the Fit4Life link at athleticsireland.ie and a list of forthcoming races can be viewed at runireland.com or the events section of Irish Runnermagazine.

BRINGING IT ALL BACK HOME: MORE THAN 5,000 ENTRANTS EXPECTED TO JOIN IN THE GREAT LIMERICK RUN THIS WEEKEND

The economic climate means that 2010 is unlikely to be remembered as a golden age of start-ups in Ireland, but the ongoing running boom has presented opportunities which men like John Cleary and Martin Tynan, the pair behind this weekend’s Great Limerick Run, have eagerly pounced upon.

The pair have run their fair share of races in other cities over the years and, Cleary observes, passed a portion of the time on each occasion wondering why it was that their own home town didn’t have a major event of it own.

Finally, having convinced each other that it was possible, they set about persuading others.

The upshot is that more than 5,000 people from Limerick, the rest of Ireland and beyond will line up this Sunday to take part in their inaugural marathon, half-marathon and 10km runs.

“The fact is that Limerick likes to think of itself as the sports capital of the country and we felt that we should have something like this. In the end, we got fed up just talking about it and decided to see if we could organise it ourselves.

“Since then there’s been a great reaction to the whole idea with everybody we’ve talked to really keen to come on board,” he says.

The pair, one might have thought, had enough to keep them occupied, with Cleary for instance, already juggling a job in engineering, family commitments and his coaching responsibilities with an underage hurling team. But they’ve somehow squeezed in the groundwork required to get their races up and running so to speak, initially doing just about everything themselves until it became clear that a small but dedicated staff was required.

Now, with the big day looming, the scale of their success is becoming apparent. Between them, the races will, Cleary says with evident pride, be the biggest participation sports event in the history of the city and, he reckons, the second biggest inaugural one after the first women’s mini-marathon, in the State. And if things go to plan, he says, entry levels will be up by a factor of three or four over the next five years.

But, he insists, the Great Limerick Run is about a good deal more than simply running.

“We wanted to showcase all that’s good about the city.

“All too often it makes the news for the wrong reasons, but people who come here for the rugby have a great time and we wanted to show a different audience what Limerick has to offer.

“That’s why we decided to tie the event into the city’s annual Riverfest. Around 40 per cent of the entrants will be coming from more than 50 miles away and that will bring business to the city and there are people from 14 other countries, a lot from Britain and some from as far afield as Australia.

“The hope is that people will spend much more than just a few hours – that’s why we’ve organised events over the whole weekend aimed at involving those who have come to run.”

A string of charities, including St Gabriel’s School and Centre, Milford Hospice and Our Lady’s Children’s Hospital in Dublin are set to benefit significantly, too.

So who says that in sport or business in this economic climate, there can be no such thing as a win-win situation?