Gardaí may be called in to investigate CRC finances 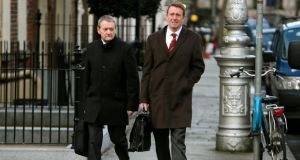 Near the end an almost four-hour Public Accounts Committee hearing today, revelations of foreign trips made around the world by Central Remedial Clinic employees emerged and the HSE chief says gardaí may be called in investigate the finances.

Independent TD Shane Ross queried the former CRC chief executive Brian Conlan, who resigned in December 2013 following the discovery of the controversial topping up of executive salaries by charitable donations, about travel costs for the group.

Mr Conlan, who was a chief executive for four months and on the board for eight years, said he had never asked any questions about travel.

“I can’t be expected to know who’s travelled everywhere,” he said.

Mr Ross questioned Mr Conlan about study days to six different countries around Europe, which included Slovenia, Norway and Spain for staff as part of the European Seating Symposium (ESS) that is run by the CRC.

Although the events were successful, Mr Ross asked was the expense justified.

“I didn’t sign off on any trips to western Europe,” Mr Conlan said.

Mr Conlan, who retired in December 2012 as chief executive from the Mater Hospital after eight years, said the ESS was “very profitable venture” for the group.

He had initially “forgot” about his trip to Dusseldorf in Germany in 2006 and remembered when pushed by Mr Ross.

Mr Conlan will be called to front the committee again with the other ex-board members and the former head Paul Kiely in the coming weeks.

HSE national director for human resources Barry O’ Brien said depending on the issues that arise when their audit is finished in March, it may be necessary to involve the gardaí.