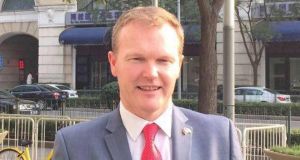 Fianna Fáil Councillor Séamus McGrath: ‘I have made this decision for family reasons. Being an MEP would be an enormous honour, but it also comes with a huge impact on family life’

Fianna Fáil councillor Séamus McGrath has withdrawn as a candidate from the European elections for Ireland South for family reasons.

Mr McGrath a former county Cork mayor informed party headquarters on Friday evening of his decision to stand down for personal reasons.

The councillor who represents the Ballincollig-Carrigaline area of Cork South-Central constituency said he would focus on the forthcoming local elections.

His withdrawal from the campaign has left fellow candidate Cork North-Central TD Billy Kelleher in pole position to represent the party in the May 24th election.

The selection convention is expected to take place next weekend with Mr McGrath and Mr Kelleher also competing with party member Jason Fitzgerald to be the party’s choice for Ireland South which gains an extra seat to become a five-seater with the expected departure of the UK from the EU.

Mr Kelleher is now expected to win the selection convention and run for the European Parliament against the wishes of party leader Micheál Martin who had hoped the poll topping TD would stay in situ and help pull in a second Fianna Fail seat in the four-seat constituency.

With a clear run at the European seat the chosen candidate would be likely to replace outgoing MEP Brian Crowley.

Mr McGrath, whose brother is Fianna Fáil finance spokesman and Cork South-Central TD Michael McGrath said in an interview in The Echo that “I have reflected very carefully on my position in the last week or so and I have reached the very difficult decision not to proceed with my nomination at this time.

“I have made this decision for family reasons.

“Being an MEP would be an enormous honour, but it also comes with a huge impact on family life. My wife and I have two very young children and I have genuinely struggled from the outset on this issue.

“My decision is not a political one, it is a personal one.

“I want to sincerely thank all the members who have given me their support. This has been an agonising decision to make, but life requires such decisions.

“This is not my time and I very much look forward to getting stuck into my local election campaign now and continuing the work I do at a local level, which I genuinely enjoy.”

Mr McGrath told the paper: “This is not my time and I very much look forward to getting stuck into my local election campaign now and continuing the work I do at a local level, which I genuinely enjoy.”