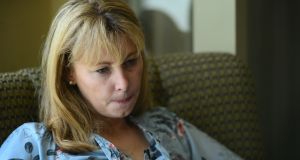 Emma Mhic Mhathúna, one of the women affected by the CervicalCheck controversy, says she had to take out a loan to pay for a family holiday while waiting to receive the €7.5million legal settlement in her family’s case.

Ms Mhic Mhathúna and her five children sued the HSE and US laboratory Quest Diagnostics Inc in the Hight Court. The HSE admitted during the case to failing to disclose a finding of cervical cancer to Ms Mhic Mhathúna, while US laboratory Quest Diagnostics admitted misreading her two cervical smear slides in 2010 and 2013. The case was settled for €7.5 million late last month.

Ms Mhic Mhathúna, who was diagnosed with terminal cancer earlier this year, is among 221 women with cervical cancer found to have received incorrect smear tests during a clinical audit of past tests by the CervicalCheck screening programme after their cancer diagnoses.

The Government agreed in June to provide an immediate ex-gratia payment of €2,000 to each of the women affected by the CervicalCheck controversy.

The HSE said on Monday that the payments had been issued to 149 women and that 27 others were currently in process.

Ms Mhic Mhathúna last week said her cancer, which had previously spread to both of her lungs and her spine, had also moved into her brain.

In a Facebook post at the weekend, Ms Mhic Mhathúna said she wanted to thank AIB for lending her money so she could go on a holiday with her family.

“The judge said immediately give Emma money so she can go away...It shows how bad things are in the country when a bank has to step in and provide for minors,” she wrote.

The HSE and Quest Diagnostics are yet to respond to a request from The Irish Times regarding when Ms Mhic Mhathúna’s legal settlement will be paid in full.

Ms Mhic Mhathúna also said she wanted to meet politicians interested in discussing the establishment of a new privately-run lab for cervical smear tests. She told The Irish Times she was considering setting up her own private lab in Ireland to give women “options”.

“Women would rather pay a small fee and have their smears done than get it done for free in CervicalCheck and not have peace of mind,” she said, adding that women should have the option of undergoing cervical checks more frequently than every three years.

“That’s too long, especially if you have health complications.”

If the 2010 and 2013 slides had been read correctly, Ms Mhic Mhathúna should have had a mandatory colposcopy.

In 2016, Ms Mhic Mhathúna was sent for a colposcopy examination and a biopsy following another smear test. She was subsequently diagnosed as having invasive cancer cells and underwent treatment between October and December 2016. In April and May of this year, she was told she had suffered a reoccurrence of her cervical cancer and that her prognosis was terminal.