Does it work? Can aloe vera help digestion? 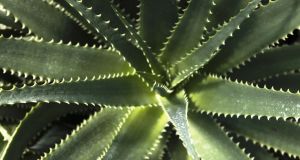 During the 1960s, a series of small uncontrolled studies reported the gel gave relief to patients with peptic ulcers and other intestinal problems.

BACKGROUND:Aloe is a common ingredient in lotions and cosmetics, and is also available for oral use. Such products are recommended for conditions ranging from constipation and indigestion to more serious ones such as irritable bowel syndrome and Crohn’s disease. Many gel products and drinks are available for general digestive health .

Aloe vera is a cactus-like succulent plant, native to parts of the world with a hot, dry climate. It is widely cultivated. Hundreds of species exist, some of which have been used in traditional medicinal systems.

Much remains unknown about the active ingredients in aloe and their effectiveness. Part of the variability arises from the different methods used to prepare the products. For oral consumption, gel is used.

Aloe leaves are thick and tough with an interior jelly matrix, which provides the clear mucilage that is aloe vera gel.

Some producers physically separate the gel from the outer parts of the leaves. Others crush the whole leaf and filter the fibrous pieces from the gel. Debate continues over which procedure produces the best product.

A different product is obtained when the leaves are cut to produce a milky yellow liquid or sap. This is called aloe juice or aloe bitters and is used as a laxative. However, the term aloe juice is sometimes used for products made from sap, gel or both. The sap contains anthraquinones which are known laxatives. The rest of this article will refer to aloe vera gel products which should contain no anthraquinones.

Aloe vera gel contains complex carbohydrates (mucilage) that trap water and are thought to have a soothing effect on the lining of the digestive tract. At least 70 other compounds have been identified in aloe vera gel and these may contribute to its actions. However, relatively little research has been conducted on its oral uses.

During the 1960s, a series of small uncontrolled studies reported the gel gave relief to patients with peptic ulcers and other intestinal problems. The patients had their conditions for a number of years, and found rapid relief from taking one tablespoonful daily of an emulsion made with aloe vera gel. Animal research over the next couple of decades showed that aloe vera gel contained components that promoted wound healing and were anti-inflammatory. Some animal studies showed that ulcers were relieved by aloe vera gel, but others found no significant differences compared with placebos.

Only one randomised, double-blind study in humans was found. This involved 44 patients with ulcerative colitis, a chronic condition involving ulcers of the colon. It can lead to bloody diarrhoea, inflamed intestines and, sometimes, more serious symptoms. After four weeks, those taking aloe vera gel improved to a greater degree than those taking a placebo. However, the differences were not statistically significant. The researchers noted that the study involved too few patients to allow a definite conclusion on aloe’s effectiveness.

Pure aloe vera gel tends to have few adverse effects. Some people develop allergy-like reactions from the gel, or get stomach cramps. If anthraquinones contaminate aloe gel, they act as laxatives. Quality control can be a problem with aloe vera gel as products have been identified containing less gel than their label states, or being adulterated with less expensive carbohydrates.

Oral use of the gel to improve digestion and relieve intestinal complaints has a long tradition, but there is little research. Some animal and laboratory studies support such uses, but little high-quality research has been conducted on humans. Even so, many food and supplement products claim the gel helps promote digestion. Whether they work seems to have more to do with individual taste than controlled research.

Product quality is an issue, especially as authentic aloe vera gel is expensive. The International Aloe Science Council is a non-profit trade association aiming to improve the quality of aloe vera products. Its logo on labels provides one way of identifying products made to the highest industry standards.

Dónal O’Mathúna has a PhD in pharmacy, researching herbal remedies, and an MA in bioethics, and is a senior lecturer in the School of Nursing, Dublin City University