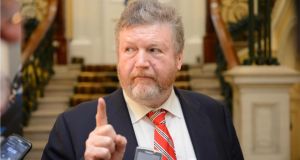 Minister for Health James Reilly: confirmed that cuts made in previous years under financial emergency legislation would be maintained. Photograph: Dara Mac Dónaill

It is “inevitable” that the kind of cuts experienced in the public sector should apply to professional fees, Minister of State at the Department of Health, Alex White has said.

Mr White’s comments come after the news that fees paid to GPs and pharmacists will be cut by €40 million before the end of the year.

“But it’s just inevitable that the kinds of cuts that we’ve seen across the public sector and across the economy are reflected in a proportionate way in relation to professional fees and that seems to me to be what’s happening here.”

Mr White said he hoped the medical profession would co-operate.

“ I think they will cooperate, I’ve had many conversations with doctors and I’ve discussed it with the IMO. I think we will have cooperation in the future in relation...for example, to universal GP care. I’d be confident that we’d have very good negotiations on a new contract in the coming months so I would look forward in a positive way and in an optimistic way to the future.”

Mr White added that a memo is under preparation for Cabinet in relation to free GP care.

Minister for Health Dr James Reilly confirmed last night that his Department would end the retail mark-up of 20 per cent paid to pharmacists for dispensing drugs under the drugs payment scheme and the long-term illness scheme, while also cutting fees paid to GPs under programmes such as the medical card scheme by an average of 7.6 per cent.

The fee paid to GPs for administering the flu vaccine is to be cut from €28.50 per vaccine to €15, bringing the fee in line with that paid to pharmacists.

The cuts are effective immediately and the €40 million figure represents savings to be made between now and the end of the year.

Dr Reilly confirmed that cuts made in previous years under financial emergency legislation would be maintained. In December, €70 million in cuts to fees for GPs and pharmacists were announced by Minister for Public Expenditure Brendan Howlin.

The Irish Medical Organisation said at that point GPs were “at breaking point” and that withdrawal from the cervical cancer screening programme was a possibility.

In its circular issued last night, the department acknowledged the pharmacy sector had experienced reductions in income “resulting from reduced fees” and reduced mark-ups.

“In addition, a number of other policy measures have also resulted in reductions in pharmacy income, including reductions in drug prices”.

The Irish Pharmacy Union has argued the cuts have resulted in a reduction in pharmacy income of up to 34 per cent.

The department, however, counters that €258 million of their losses are due to a reduction in the wholesale mark-up paid to pharmacists and “is not a remunerative element of payment to pharmacists and therefore should be excluded from the analysis”.

It also says that while there has been a significant reduction in the retail mark-up over the period 2008 to 2012 of just over 75 per cent, this has been off-set by the significant increase in prescribing volumes under the primary care reimbursement scheme.