A mass-vaccination drive for GPs and practice nurses has begun in Ireland. Three centres delivering Moderna vaccine jabs have been opened in Galway, Portlaoise and the Phoenix Park, Dublin as seen in the video above. 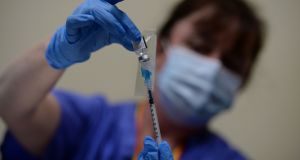 St Michael’s Hospital has been told not to expect further doses of the vaccine ‘for the coming week or two at the least’. Photograph: Alan Betson/The Irish Times

The head of a Co Dublin hospital has criticised “unacceptable delays” in providing vaccines for her staff.

After at least three deliveries of vaccine failed to materialise, the general manager of St Michael’s Hospital in Dún Laoghaire, Anne Coleman, told staff on Friday she is seeking a “fair share” of vaccines for them.

The hospital has been told not to expect further doses of the vaccine “for the coming week or two at the least” as immunisation of nursing home residents and staff is prioritised.

In her message, seen by The Irish Times, Ms Coleman said she was aware of the frustration among staff.

She said that since the new year the hospital had submitted information on the number of staff to be vaccinated, the number of vaccinators needed and the number of doses to be administered each day.

“On three occasions deliveries were expected but didn’t appear. The KPMG IT support person even had arrived on site as he was also told the vaccines were en route. On each of those occasions, it didn’t arrive.”

Inside Politics · Covid-19: can our hospitals cope?

The hospital was then told the vaccines would arrive on Tuesday and Thursday.

Last Tuesday, 90 doses arrived without notification and the National Maternity Hospital also redirected 60 doses. Some 108 staff were vaccinated in five hours and another 42 the next morning.

The hospital made appointments for the Thursday when a second delivery was expected. Ms Coleman said “a number of staff” were turned away because “they weren’t on the list”, but guidelines on prioritisation were followed.

On Thursday, she continued, “we were informed by Ireland East Hospital Group [IEHG] that the acute hospital sector will not receive any further first-dose vaccines for the coming week or two at least. The roll-out in the residential care services is now being prioritised along with the second dose for the HCWs [healthcare workers] vaccinated in late December.”

Ms Coleman told staff she found this “unacceptable” and was continuing to pressurise IEHG and the HSE to provide a “fair share” of vaccines for hospital staff. “How and who the decisions are being made about the vaccine roll-out appears to be a closely guarded secret,” she commented.

She urged staff to remain supportive of each other and for no one to challenge a colleague “about how they did or didn’t receive a vaccine this week”.

One member of staff told The Irish Times of going for the vaccine last week but being told supplies had run out.

“They said there are no more vaccines for the moment and that the nurses and doctors will just have to wait,” according to the staff member.

Although frontline health workers are supposed to be prioritised in the current round of vaccine delivery, in a number of hospitals non-frontline staff have also been immunised, it has been alleged, in some cases ahead of colleagues directly involved in the treatment of patients.