Will most of us be vaccinated by the summer, or will it drag on into autumn? 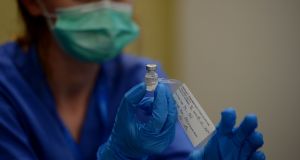 The Pfizer/BioNTech Covid-19 vaccine being administered to staff at St Vincent’s University Hospital in Dublin on Wednesday. Photograph: Alan Betson

The moment when the balance tilts and we start to feel the pandemic is fizzling out still feels frustratingly far away. The surge in case numbers and news of the more transmissible UK variant – and the reality that the vaccine rollout will take time – has upended our expectations.

We now face a really difficult interim period which is going to be longer than we had hoped for – the gap before enough people get vaccinated.When this might happen is still unclear.

But we will certainly need an acceleration in supply including – crucially – a number of new vaccines including the Oxford/AstraZeneca vaccine to come on-stream if we are to have really significant numbers done by the summer.

Fortunately there is some positive news in recent days in terms of vaccine supply, and signs that the official system is now focused on accelerating the delivery of whatever does arrive.

There is a long way to go yet before we have clarity – and an interesting debate is how far we might be able to ease restrictions when the vulnerable members of society have been vaccinated, and as increasing numbers join them. We won’t be locked up one day and free the next – it will be a process.

Managing this is going to be tricky – from all points of view. The start has been slow, largely due to the limited supply. On an optimistic analysis, with early approval of more vaccines and quick rollout – involving GPs and pharmacies for the easier ones to handle – this will accelerate in the second quarter of the year.

We could have large numbers done by early summer and might get to the magic 70 per cent coverage by mid- to late summer. Or, if approvals are a bit slower and so is the rollout, it could slip to the autumn before we get sufficient coverage and the magic 7 million-plus jabs have been administered.

There is the other side of the equation: managing the easing of restriction

The political noise which will build up around this will be enormous, with so much at stake for public health and also the economy. This will be difficult for the Government, given the inevitability of a slow start due to supply constraints and much quicker progress in countries such as the UK and Israel.

Giving the public clear information – including about the uncertainties of supply – will be vital. So, of course, will be getting the logistics right. For now, the constraint is supply and we are in the same boat as other EU countries.

But by the spring supply should grow significantly, and the focus will then be on delivery. And that is down to the Government and its agencies. Expect the GPs to be signed up shortly to aid delivery – it will be vital to accelerate this so that you can walk down to your GP or pharmacy to get it done. But we don’t yet know what the plan is here – and soon enough we need to.

And then there is the other side of the equation: managing the easing of restrictions. Say that the case numbers are low enough to allow most sectors to reopen by the middle of March, with some exceptions. Will reopening then set off a fresh surge and mean we are back into another lockdown, or semi-lockdown a few weeks later, because we won’t have enough vaccinations done by then?

We have failed to find a way to live “with” the virus while keeping most of the consumer-facing part of the economy open. If new variants increase the risk of transmission – and it seems they do – then this will become even more difficult. We have a lack of data about where cases are originating, but clearly people gathering indoors in various settings ignited the Christmas surge. So, for the sake of argument, while schools, shops and construction might reopen when case numbers fall this time, are restaurants, pubs and so on destined to remain shuttered until enough people are vaccinated?

I expect that the Government will be very cautious in the reopening to come. The key point is that accelerating the delivery of the vaccine might just make this workable by bringing the end-point forward, whereas if delivery is delayed it could get really difficult, with perhaps further lockdown coming into play, or prolonged closures. One sector which will need special help is anything connected to inward tourism, set to have another bad year as right now few people will be booking overseas trips until they see how things pan out.

The exchequer returns published during the week show that due to the remarkable resilience of the parts of the economy which have largely kept operating, tax revenues have held up. The fact that income tax receipts were just 1 per cent lower was extraordinary, given the hit to the jobs market. It is largely explained by lower-paid employees – who pay less tax – taking the brunt of the economic price. Together with the ability to borrow at zero or even negative interest rates, this means the State can continue to support the key affected sectors.

The fallout will still be enormous in economic terms. Many businesses will not make it through. Unemployment in December, including those on the Pandemic Unemployment Payment (PUP), was 20 per cent. This overstates the real position as some on PUP will go back to work. But many now will not. The economic legacy will be an unemployment crisis, particularly amongst younger people.

Getting the vaccines out quickly will limit the damage and mean that recovery can start later this year. And huge savings in people’s bank accounts can start to be spent, which will really help. In the meantime a really difficult balancing act awaits when we emerge from the current crisis phase.