Why is Ireland’s Covid vaccination campaign off to such a slow start?

Factors include the EU’s role, supply issues and a lack of clarity over who is in charge 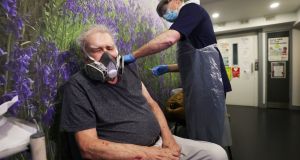 With coronavirus numbers out of control in Ireland and many other countries, there will inevitably be intense focus on progress made by governments in vaccinating their populations against Covid-19.

In 12 months’ time, the difference between a slow and a fast rollout of vaccines here will probably be measurable in terms of the loss of hundreds of lives, along with tens of thousands of jobs.

So far Ireland has got off to a slow start, leaving the Government and health officials open to accusations of sluggishness and delay. By the end of December one in every 2,500 people had been vaccinated, compared with one in eight in Israel and one in 80 or so in the US and the UK. By that date 1,800 Irish people had been immunised, according to Our World in Data, compared with more than 40,000 in Denmark, a country with a slightly bigger population than our own.

The criticisms will only intensify as soaring case numbers heap further pressure on the health service and force much of society to remain shut. The best answer to them is to make serious inroads into vaccinating the population, but this is contingent of there being enough supply.

This, in turn, depends on authorisations from EU and Irish regulators, which have tended to lag behind other jurisdictions so far. Another factor is the size of the order made by the EU on behalf of member states for individual vaccines.

It was only after serious pressure from Germany that the European Medicines Agency brought forward its decision last month on the Pfizer/BionNTech vaccine, and now it is due to make a decision on the Moderna vaccine in the coming days.

The agency is not alone among regulators in having issues with the application by Oxford/Astra Zeneca for its vaccine, and its requirement for extra data to be provided has pushed back a decision on this until February.

The problem is that this vaccine was conceived as the workhorse of European vaccination programmes, because it is cheap, easy to transport and works in a way similar to existing vaccines, unlike the Pfizer/BioNTech and Moderna treatments, which use novel technology.

The EU went for a strategy of not putting all its eggs in the one basket by placing orders for six different vaccines. It may also, with the benefit of hindsight, have spent too long haggling over price. A number of last year’s likely contenders got delayed, and regulatory decisions moved slowly, leaving the bloc with insufficient orders for the vaccine that was out of the traps first, Pfizer/BioNTech.

As a result, there is little point in the Irish vaccination programme “getting ahead of itself” until a secure and ample pipeline of vaccines comes on stream.

Until that happens, we will have to make the best use of what we have. The UK has delayed the second dose of the vaccine so that a greater number can be administered a first dose and so enjoy the partial protection this offers. This approach has split scientific opinion. Even the drug manufacturers are divided, with Pfizer resolutely opposed to any delay in administering a second dose of its vaccine and AstraZeneca more favourably disposed to the idea.

For now, this approach has been ruled out in Ireland but another idea we may adopt from the UK is to extract six doses from a vial of Pfizer/BionNTech vaccine rather than the recommended five. When the right needle is used, the content of the dose can be split six ways, rather than being used five times and leaving some fluid over. This could potentially increase productivity by up to 20 per cent.

Some countries have decided to start their vaccination programme with working-age adults rather than vulnerable care home residents, but this approach is unlikely to find favour in Ireland.

At this point, it is difficult to tell who is running the vaccine rollout programme here. Is it the Department of Health, which has decided the public health response during the pandemic? Or the HSE, which is administering the vaccinations? Or the taskforce that drew up an implementation plan and is still active?

While the UK started administering the Oxford/Astra Zeneca vaccine at 7.30am on Monday, Irish journalists seeking updates on supplies of the Moderna vaccine here were being referred by the Department of Health to the HSE, and by the HSE to the department. A plan for vaccinations in nursing homes was delayed on Monday, seemingly over consent issues. GPs are still wondering when they and their staff will be immunised.

At least Minister for Health Stephen Donnelly was able to announce an increase in this week’s vaccination target from 20,000 to 35,000.

None of these early teething issues will matter in the long run, hopefully, but greater clarity would do no harm.