What restrictions are being eased under The Path Ahead plan? 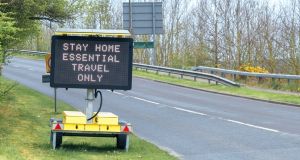 The Government will consider extending the 5km exercise limit and easing restrictions on outdoor activities and meetings at the beginning of April - if progress continues in terms of case numbers. Photograph: iStock

There will be enhanced investment and expansion of testing technologies and methods and expansion of the public health system, as well as new criteria for measuring the impact of a “slow and gradual” reopening of the economy, according to the Government’s new plan for managing the pandemic.

The plan, The Path Ahead, also features dour warnings about the economic impact of the pandemic and the future of extraordinary State supports for businesses and workers.

Most immediately, the Government will consider extending the 5km exercise limit and easing restrictions on outdoor activities and meetings at the beginning of April - if progress continues in terms of case numbers.

However, according to the State’s redrafted plan for managing the pandemic, these relaxations, if they come, will be allowed a three to four week bedding in period before anything further follows.

The requirement to work from home will remain.

In addition to the well-flagged plans to resume school , childcare and extend pandemic income and business supports, the Government announced another €20 million for mental health funding and providing supports for vulnerable groups.

Junior, senior infants, first and second class will return at primary while sixth years will return at secondary. Special schools will also return to full attendance, while children will return to early start pre-school classes and early intervention special classes.

Target date for return of remainder of primary school children return – third to sixth class - along with fifth year students at second level . This date will be reviewed.

Early learning and care (from birth to six years) and school-age childcare services (up to 14 years) to reopen.

Target date for the return to in-school education of the remainder of secondary students: first to fourth year students.

While the Government plan outlines that these measures will be considered on April 5th, it nonetheless warns that “public health advice is that it is too early to say how and when other restrictions should be eased given current uncertainties”. When it comes to the start of April, the document outlines that the decision will be made based on four different criteria:

1. Disease prevalence, as measured by case numbers/incidence, and that the R number “is such that we can be confident we can continue to suppress the disease”

2. Hospital and critical care occupancy levels that protect the health service and allow for the safe resumption of non Covid care

3. Ongoing and steady progress on the vaccination programme

Easing of restrictions will be “slow and gradual”, with measures spaced out.

The document promises further investment into public health, including “surveillance, track and trace, use of new testing technologies, ventilation and research and innovation”.

So-called “rapid” antigen testing, which critics say Ireland has been slow to adopt, will be the subject of a new plan for deployment to be finalised by mid-March.

There is an update on the vaccination programme, with a revised allocation sequence promised following new advice from the National Immunisation Advisory Council (NIAC), which is thought to relate to those with chronic medical conditions. It promises that roll-out will only be limited by supply “with the next phase focusing on vaccination centre logistics, workforce recruitment and deployment and ongoing enhancement of the ICT platform”.

It signals that further action on restricting international travel may be en route, with further measures that “will continue to be advanced” and that restrictions “will need to be kept under constant review to ensure travel does not become a weak link in our response as domestic transmission is brought under control”.

Some scheduled clinical scheduled services will be reintroduced in a “prioritised and incremental manner” by the HSE in the coming weeks, if disease numbers allow.

The Government plan outlines a range of wellbeing and mental health plans, including “citizen empowerment” wellbeing activities. Each Government Department is to be asked to prepare an action plan for service delivery “to mitigate backlogs and anticipate pent up demand or unmet need arising from restrictions”.

Regarding policing, the plan promises ongoing high visibility patrols and checkpoints at public amenities, while the Garda “will be carrying out stop checks nationally” to ensure recently returned travellers are quarantining and a person has been required to carry out a PCR test, they have done so.

The plan has an extensive section on next steps, detailing how the State will chart a path through the remainder of the pandemic. It signals that while the Level 5 approach is being retained, new measures are being considered.

The framework will continue to provide “an appropriate mechanism to guide decision making, but experience over the last number of months has underlined the importance of it continuing to be applied in a flexible manner, adapting measures to address the public health risk at a given time in addition to any specific contextual considerations”.

There will be “detailed sectoral guidance” for measures that apply at each level of the framework. The approach will be guided by three “overarching objectives”: reducing case numbers and keeping them low, completing vaccination “of all those indicated for”, and continuing to protect the most vulnerable, public health services, social care, education and childcare.

It outlines that easing of measures “should be slow and gradual” with sufficient time between phases. However, it also signals an aspiration that once the levels of Covid in the community are suppressed, they can they be contained through an approach that combines vaccines, public health, antigen testing, and additional advice in respect of ventilation which it promises will be finalised by the end of March. The measures outlined constitute a shake-up to the systems designed to control the growth of the virus.

It promises that recruitment in public health will be accelerated to make good on promises in Budget 2021 to double the public health workforce. It also says “further enhancements” are needed in contact tracing and testing “to ensure we have the capability to rapidly, proactively and aggressively contain outbreaks of infection”.

It says there will an “aggressive testing strategy with a low threshold for intervention”, and “consideration of alternative referral pathways”. There will be “active testing and monitoring of close contacts”, the rollout of retrospective contact tracing, “real-time and integrated data and intelligence”, and it promises improvements in turnaround times as well as a “shift towards a regionally based and organised response”.

Consideration will be given to expanding the contact management programme and community call to support people isolating or restricting movements, as well as expanded use of alternative accommodation for those who cannot self isolate or restrict movements at home.

The plan states that there is no “silver bullet” and that the disease is difficult to control at moderate levels. “Experience shows it can accelerate quickly if it is not aggressively and proactively suppressed” - putting a premium on keeping cases as low as possible.

It promises more investment in genome sequencing, sero-prevalence studies, IT, surveillance tools and infection prevention and control. There will be a role for “widespread surveillance testing” and rapid test research studies. “Consideration is also being given to the use of rapid tests in asymptomatic community populations”, it states.

According to the plan, a “complex balance between Covid-19 fatigue and resilience is emerging” and flags the risk that high levels of fatigue could damage compliance with measures, and that there are further risks that those vaccinated will be “less likely to adhere to public health measures”. Despite vaccination, “there are real risks” that there may be similar challenges in controlling Covid-19 next winter, due to the unknown impact of vaccines on transmission and variants, as well as risks from other diseases and more congregation if social distancing is not in place, and lower levels of adherence to rules.

An expert group will report on the issue of ventilation. In order to administer up to 250,000 vaccines per week, vaccine centres will be expanded and more vaccinators, including dentists, pharmacists and optometrists will be trained, alongside more direct recruitment.

Pre-departure PCR tests will now be needed for passengers transiting through Irish airports, while categories of reasonable excuses for overseas travel will be narrowed. The document says that these are “an unprecedented set of restrictions for a country that is ordinarily very dependent on international travel”.

Extensions to the EWSS and PUP schemes to the end of June will cost around €1.3 billion and €1.6 billion respectively, the plan says, in addition to €250 million more for CRSS and €160 million for the commercial rates waiver.

It flags that when the virus is brought under control “there will be a need to move away from the extensive and wide-ranging emergency supports in place” and towards more targeted interventions. As recovery takes hold, it warns that “steps to put the national debt-income ratio on a downward trajectory will also be necessary”.

It states that supports will be amended and withdrawn, but that the economy will not “return to as it was prior to the pandemic”. “There will be permanent changes in the labour market, and in the way goods and services are produced and traded”, as well as changes to working patterns and mismatches between skillsets and the needs of firms. Restrictions will increase pressure on the banking sector, it warns.

A National Economic Recovery Plan will be published, including measures to reboot particularly challenged sectors such as tourism. It warns that “the domestic tax base is not sufficient to cope” with the current levels of spending beyond the very short term.

“In order to ensure fiscal sustainability, therefore, it will be necessary to roll back these temporary expenditure measures once vaccine rollout has progressed and the economy has reopened,” it warns, adding that Irish debt is among the highest in the developed world, “another reason why fiscal sustainability will have to be addressed sooner rather than later”. It also warns that general supports hinder the ability of firms to transit out of declining sectors and into expanding ones. “This means that once the economy has reopened, supports must become more targeted”.