What long-term impact will school shutdown have on children? 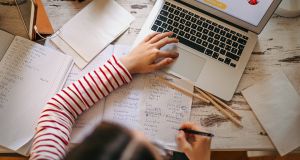 Experts agree that much better infrastructure is needed for remote teaching.

In the past the State’s schools stayed open during war, famine and storms. However, the Irish education system was never built to deal with the extended shutdown caused by Covid-19.

Yesterday marked the formal end of the academic year at primary level, but significant numbers of pupils have been disengaged since schools closed on March 12th last.

“This is a crisis situation and it needs to be named as such,” says Dr Paul Downes, an associate professor of education at Dublin City University’s Institute of Education.

Downes is not the only one to be concerned about the shadows that will be left by the unprecedented extent and length of current school closures imposed by the coronavirus pandemic.

During the two months of summer holidays, children from disadvantaged backgrounds tend to lose up to 20 per cent of their learning during the previous academic year

A major concern, he says, is around the damage to children’s concentration levels, as well as reading and maths loss.

While principals, teachers and parents have worked hard to keep learning alive online, these efforts are not likely to provide anything close to the quality of education delivered in the classroom. In normal times, teachers are all too aware of the “summer slump”, where students’ learning regresses.

There is now mounting concern over damaging long-term impact six months out of school will have on pupils when they return in September.

During the two months of summer holidays, children from disadvantaged backgrounds tend to lose up to 20 per cent of their learning during the previous academic year.

“We’re now talking about two months, plus four months out of school, so the problem will be much, much bigger . . . The risk of learning loss is even bigger for maths than for English.”

Of course schooling hasn’t stopped completely, as it does during holidays. Most schools have been offering some form of distance learning, but it has its limits. There is emerging evidence that pupils working from home have been doing less learning than was previously thought.

Nationally, the Corona Citizens’ Science study, a population-wide survey conducted by research teams at NUI Galway and Dublin City University, found that only 29 per cent of children had daily contact with their schoolteacher.

A large proportion – 21 per cent – reported contact two or three times a week, but for most – 47 per cent – it was once or less often each week. For 3 per cent of children there is no contact whatsoever with their primary school teacher.

In disadvantaged primary schools in Dublin, latest research indicates that at least 25 per cent of students have not been engaging with school since the shutdown

At second level, there was more contact time: a total of 64 per cent of under-15s and 54 per cent of over-15s reported daily contact with teachers.

Most experts agree, however, that the most vulnerable – children from disadvantaged homes and those with special or additional needs – who stand to lose out most.

In disadvantaged primary schools in Dublin, latest research indicates that at least 25 per cent of students have not been engaging with school since the shutdown in mid-March. This rises to 50 per cent in some individual schools.

One principal of a disadvantaged school in north Dublin says they have had no power to compel parents to ensure their children engage.

“Normally there’s a understanding that you have to go to school, but with the lockdown there was none of that . . . we don’t have powers like the Garda; we depend on families and it comes down to conditions at home and the value that’s place on education and parents’ experience of it.”

Another principal of a Deis school worries that much of the good work done in narrowing the gap between haves and have-nots over the past decade will be reversed.

'The use of technologies to try to overcome the lack of social contact is only minimally effective. Children report emotional, social, physical and behavioural difficulties'

“We will only realise the full impact of this when we get back and settled into the new year, and the department won’t realise what has happened until standardised tests are completed in a year’s time,” the principal says.

If the impact on disadvantaged pupils is severe, the toll of pupils with special needs – and their parents – is even more acute. Many parents report that – in the absence of education, therapies or social interaction – their children have lost key skills and their behaviour has deteriorated.

“Children are not the face of this pandemic but they risk being among its greatest victims,” says Dr Carol Barron, from DCU’s school of nursing, psychotherapy and community health.

“The use of technologies to try to overcome the lack of social contact is only minimally effective. Children report emotional, social, physical and behavioural difficulties.”

Zoe (8) is one of those children. Diagnosed with a rare genetic disorder, she is intellectually disabled, non-verbal and incontinent.

Thanks to the painstaking intervention of teachers and therapists at Rosedale special school in Galway, she learned to spoon-feed herself, sit upright, use a computer and take joy in everyday things such as the arrival of the school bus.

Since schools closed last March, her mother Angelina says she has grown frustrated and started throwing temper tantrums for the first time. Physically, her legs are deteriorating. In recent weeks, she lost the ability to spoon-feed herself.

“It’s so distressing,” she says. “School closures just aren’t fair on her. When I think about it, all I want to do is cry.”

“It took months to teach her to hold a spoon for a few seconds, then to move it to her mouth, then to put food on it; then to move that spoon to her mouth again. Steps like that can take up to two years to teach. Months of repetitive work, day in day out, with dedicated support. Now it’s gone.”

So if this is a crisis, what emergency measures are under way to tackle it?

Most experts agree that much better infrastructure is needed for remote teaching. For example, there is no national learning platform for schools. Instead, they are required to find their own solutions.

They also point to the need for a full return to school, if at all possible, in order to begin the work of tackling learning loss.

In the meantime, the Government has announced plans for a summer programme of support for children with special needs and those from disadvantaged backgrounds.

In practice, this will amount to about 40 hours or two weeks of support in school or at home. Most experts believe this is little more than a sticking plaster.

“In the UK, the Tory government has invested £1 billion in catch-up programmes,” says. “Our response to our most socioeconomically marginalised children and young people is tepid by comparison.”