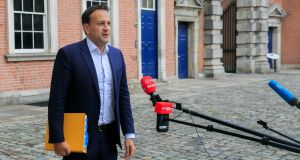 The Tánaiste and Minister for Enterprise, Trade and Employment, Leo Varadkar, has said his assumption when dealing with the banks is that he “doesn’t fully trust what they say until it has been demonstrated otherwise.”

Mr Varadkar, who is to meet the chief executives of the banks next week, along with the Minister for Finance, Paschal Donohoe, said that when you meet the banks “they talk you down with regulatory gobbledygook”.

Asked if he believed the banks would not seek to make additional profits from interest breaks granted to customers because of the coronavirus lockdown, Mr Varadkar said the banks “have form, that’s the truth of this. We’ve seen the tracker mortgage scandal”.

Banks have have been accused of profiteering from the Covid-19 crisis by charging mortgage interest on customers who avail of a Government-backed moratorium on mortgage payments during the crisis.

The Republic’s five retail banks confirmed last week they would continue to apply interest to such loans, claiming they were relying on advice from the European Banking Authority.

However, the European regulators have since confirmed that borrowers would not be pushed into default regardless of whether interest did or did not accrue on loans subject to the relief.

Sinn Féin TD Pearse Doherty accused banks of “wilfully misleading” Ministers after it emerged bankers told the then taoiseach Mr Varadkar and Minister for Finance Paschal Donohoe on May 11th that if interest did not continue to accrue, loans would be considered to be in default.

Mr Varadkar also said he believed it was essential that the Government’s guarantee scheme for loans to business involved some risk on the part of the banks.

They had to have “skin in the game,” he told Richard Curran, presenter of The Business radio programme on RTÉ radio 1.

If loans were entirely guaranteed by the State, then there would be a danger that the banks would lend recklessly. Businesses and business people would be among those who would have to pay more tax if there was defaulting on guaranteed loans.

A stimulus package of up to €3 billion to be announced over the coming weeks is just one of a number of packages aimed at dealing with the crisis caused by the pandemic, he said. It is just “one of our bullets”.

He said it had been a real privilege to be Taoiseach over the past three years, and his mission now was to lead the economic recovery and “ensure that we bounce back and not have another lost decade like we experienced in the past.”

The state was expected to borrow up to €30 billion this year. It was important that Ireland, which already has a significant debt, avoids also having a significant deficit.

“We are not seeking to be the best fiscal boys in the class, not at all,” he said. Ireland should keep its deficit so that it is in the middle of the eurozone range in terms of its deficit.

He said that when compared with Northern Ireland and Britain, Ireland had done well in terms of welfare support for people who lost their incomes, but that “where we have probably fallen down is on grants” to business.

An enhanced grant scheme for business is one of the elements that will be contained in the stimulus package, as will be an extension of the wage subsidy scheme.

He said that overall, the supports that are being sought by different sectors of the economy comes to approximately €40 billion, and that is on top of additional costs in health and education arising from the pandemic.

Asked about the difficulties that Fianna Fáil have been experiencing since the new government was formed, Mr Varadkar said he had been reflecting on how it is completely different to be in government as against being in opposition.

Being in government meant being subjected to different standards and a higher level of scrutiny. It could also be seen in relation to the level of abuse people were subjected to on Twitter.

A former minister had told him a few days ago that the moment he stopped being minister “the abuse just ceased like that.”

“You now see people who would be lauded when they were in opposition by the keyboard warriors, now being subject to pretty toxic abuse.”