Developed nations’ recovery hit through trade links unless they help more, WHO finds 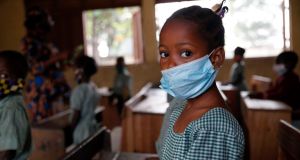 A schoolgirl wears a face mask in class during an open day at the Dairy Farm primary school in Agege district of Lagos, Nigeria. Photograph: Akintunde Akinleye/EPA

Advanced economies face a significant hit to their economic recovery from the coronavirus pandemic unless they help developing countries speed up their vaccination programmes, according to a report that will be published by the World Health Organisation on Monday.

If the rollout of vaccines in developing countries continues on its current trajectory, advanced economies face output losses of up to $2.4 trillion (€1.97 trillion) – 3.5 per cent of their annual gross domestic product before the pandemic – because of disruptions to global trade and supply chains, the study said.

“The longer we wait to provide vaccines, tests and treatments to all countries, the faster the virus will take hold, the potential for more variants will emerge, the greater the chance today’s vaccines could become ineffective, and the harder it will be for all countries to recover,” said Tedros Adhanom Ghebreyesus, director-general of the WHO. “No one is safe until everyone is safe.”

The research illustrates the interconnected nature of the global economic recovery and means that even if the world’s leading nations succeed in vaccinating their vulnerable populations promptly, they still face significant economic vulnerabilities from the pandemic.

“Emerging and developing economies are linked to advanced economies through exports and imports, and not just of finished goods,” said Sebnem Kalemli-Ozcan of the University of Maryland, lead author of the report.

Overall a delay in bringing the pandemic under control in emerging economies would wipe about $4.4 trillion off the world’s output this year, or about 5.7 per cent of annual global output before the pandemic, according to the research, which was commissioned by the International Chamber of Commerce. More than half the impact would fall on high-income countries, the study found.

The WHO has warned of a global “catastrophic moral failure” as poorer countries fall behind richer ones in accessing vaccines.

The Covax facility – which was set up last year by the WHO, Gavi and the Coalition for Epidemic Preparedness Innovations to ensure equitable distribution of vaccines – has struggled to mobilise support from rich nations and faces a $27 billion funding shortfall.

The finance ministers of Norway and South Africa have called on fellow ministers of the G20, the OECD and Covax member countries to meet on January 29th to discuss plugging the funding gap.

That would deliver a return on investment of more than 166 times by avoiding the forecast loss of output, the ICC study said.

The research looked at trade links and supply chains for 65 countries and 35 business sectors and estimated the impact on trade and economic output in various vaccination scenarios, based on whether workers in each sector need to operate in proximity to one another.

Under the most extreme scenario, in which rich countries receive vaccines this year but emerging and developing countries do not, the hit to global output would be $9.2 trillion.

The base-case scenario, causing a $4.4 trillion loss of output, assumes that advanced economies vaccinate their vulnerable populations by the end of April and that emerging and developing economies reach the same point early next year.

Ms Kalemli-Ozcan warned there were some risks which that estimate did not cover, including the possibility that it would take longer than a year to reach vulnerable populations in poor countries, and that the virus could mutate and continue to spread in advanced economies even if they reached critical levels of inoculation. – Copyright The Financial Times Limited 2021